Bellaire After The Virus Shutdown – In Transit and On Hold

City of Bellaire Economics in 2020 – A New Paradigm

The economic damage from the current health crisis is alarming, and the City of Bellaire anticipates a decrease in revenues FY2020.  At the April 6, 2020, City Council meeting Council member Wesely requested discussion and possible action on measures to reduce expenditures, including a hiring freeze.

No decision was approved at that meeting, however open employment positions were discussed, including one for a building official.

Then Bellaire City Manager Paul Hofmann explained in his April 10th weekly memo that previous forecasting indicated a “need to be frugal”, that he had already been developing a plan for restructuring the city organization with the objectives of reducing recurring expenses, and that “These changes will involve the ultimate reduction of budgeted positions”.

Who is actually behind the construction of the parking lot at 4300 Bellaire Blvd?

William Davidson, on staff since 2012, had been our building official since 2016.  Mr. Davidson is still on the City payroll, however he transferred from Development Services to a position in Public Works in March of 2020, shortly after he approved the parking lot fiasco at 4300 Bellaire Blvd in late February.  UPDATE 5/1/2020, per the City Manager’s Weekly memo:
“Resignation  –  William Davidson has submitted his resignation, effective May 4. William has been a valuable member of the team and has played a vital role in this community’s recovery from Hurricane Harvey. We wish him well in his future endeavors.”

For what it’s worth, it’s doubtful that he’s actually the responsible party, since he consulted ChaVonne Sampson in Development Services and Karl Miller in Parks and Recreation.  Click on the Patricia King-Ritter email communication at left to view who promoted the lot.

Ms. King-Ritter is the director of the Evelyn’s Park Conservancy, and City documents acquired through the Freedom of Information Act present a picture of members of the Conservancy board promoting this parking lot for years. UPDATE: Ms. King-Ritter has requested a hearing before the Planning and Zoning Commission.  More on that later. 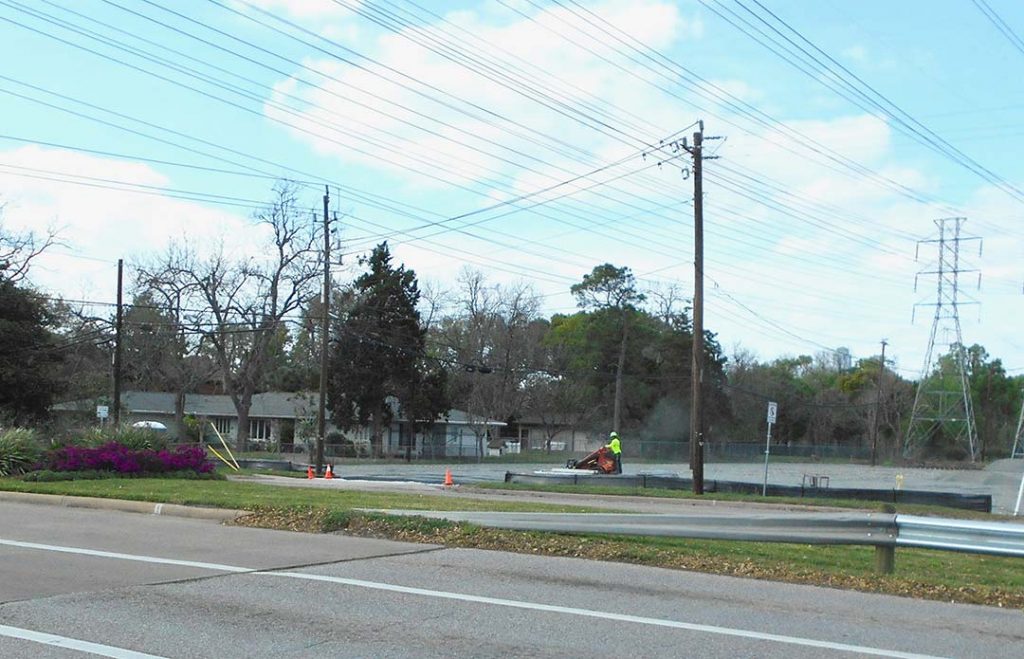 Place business was approved by the City of Bellaire.  MM One Bellaire LLC was allowed to build a lot for Southside Commons employees on the CenterPoint land in a residential district. The Park agreed to rent space from CenterPoint for overflow parking.  The lot was not approved by Planning and Zoning or City Council.  Just by Mr. Davidson.

Meanwhile we were still paying a salary to Mr. Davidson PLUS $5,000 a month so someone can fill his position for now. It seems that in the era of frugality there could be costs for two budgeted positions instead of one – a new building official and Mr. Davidson’s new position.  How does that reflect frugality or sound budget management?

The real estate market is soft, property taxes may or may not remain at current levels.  Other revenues will be affected due to cancelled programs, lower sales tax receipts, etc.  Yes, we will recover, but when?


For The Immediate Future

Bellaire has lived with an economic boom and increasing property tax revenue for the past ten years, but somehow ended up with more debt than ever before.  Now the City Manager and staff may actually have to manage expenditures and stop all discretionary spending, and it’s up to City Council to be certain they do so.  The attrition to our finances is like water dripping on a stone – eventually it’s worn away.


In recent years City Councils approved budget after budget stretched to the limit of revenues, freely spending for unnecessary consultants, studies, beautification, plans for pathways and sidewalks and other questionable projects. Cost overruns on the municipal facilities alone ran into the millions once the bond funds were spent.

They neglected to set aside funds for large capital improvements.  We would just borrow what we needed.  The City Council and City Manager promoted a $54 million dollar bond issue in 2016 to pay for infrastructure improvements, some of them of dubious value to the City.

And within a few years they were discussing another large bond election, perhaps as early as 2019 or 2020. Now almost half of our property taxes go to pay debt service on our bonded debt.  Savvy Bellaire voters won’t be approving more bond issues any time soon.

*By the numbers – City Staff: City staff has increased by 21 personnel since 2010, as we recovered from the 2008 recession.  Of that number, 9.5 were during Mr. Hofmann’s tenure from 2014-2019, including several new administrative positions.  Now Mr. Hofmann is proposing to reorganize the City departments and cut staff positions.

*Staff and Debt statistics per the Comprehensive Annual Financial Report, 9/30/2019

Included in the agenda for the April 20 Council meeting you’ll find an item from the City Manager advising of a plan to reorganize the City Departments.  The full plan will be presented at the May 4, 2020, Council meeting.  Apparently Mr. Hofmann feels this is a suitable response to Councilmember Wesely’s suggestion of a moratorium on hiring more staff at this time.

My personal feeling is that these matters are too important to be handled during telephonic Council meetings and should be postponed until meetings can be safely held in person in the City Council chambers.  There’s no word on when that will be possible.

About That Gateway Parking Lot at 4300 Bellaire Blvd

No comment on the stunning lack of factual information from the City Manager at the April 6, 2020, Council meeting regarding the removal of the parking lot at 4300 Bellaire Blvd.  Apparently no one other than William Davidson was aware of the plans for the lot.  Now a City of Bellaire letter (click at left) to the developer specifies removal of the lot 14 days from the date of the letter.

The first view of the City.

Mr. Hofmann seemed to think the 14 days began with date of receipt by the addressee, whenever that was.  And he thought that the developer would be applying to Planning and Zoning for a rezoning of the property to allow for the parking lot.  Indeed, Patricia King-Ritter has submitted a letter to the City that is apparently considered a new zoning application for the parking lot.

If members of City Council or City staff support this parking lot at our main entrance, in a residential area, I predict there will be serious protests once the Council meetings resume in Council chambers.  We’re not some small city located in an industrial area close to the Ship Channel, where open parking lots and all night traffic are taken for granted.  This lot was built to service Southside Commons, a commercial development in Southside Place with some businesses advertised to be open until 2 AM!

We are a City of Homes, with zoned residential areas that encourage investment in beautiful residences.  Most Bellaire residents, no matter where they live in the City, understand that this would be enormously harmful to Bellaire’s values, image, and reputation.

Does this entire episode deserve outside investigation?  Perhaps the law firm working with the area residents will initiate one.  Find more information on the parking lot at 4300 Bellaire Blvd in this article.

Then There’s The Downtown Beautification Project

Well, at least one public parking area of the Spruce and Fifth project is sure open for service!

The vehicles you see parked along Fifth by H-E-B may belong to shoppers who love to walk though the garage to enter the store, but since they were there early on a Saturday morning it’s more likely they belong to H-E-B employees.  There will be even more public spaces available once Spruce St. is complete, even as private business parking spaces are lost.  The project is already months overdue.


Fifth St is now open, with a sturdy metal railing on the west side at Bissonnet to prevent

pedestrians from falling off the new retaining wall.  The dedicated right turn lane to Bissonnet is gone, though, so expect a wait for a right turn on red if someone in front of you wants to turn left.  All thanks to the beautification project paid with Bellaire bond funds and Bellaire taxpayers.


Say, What About That $12.8 Million Siemens Contract?

Finally, there has been an item missing from Mr. Hofmann’s recent weekly memos.  It’s the closeout date for the $12,781,805 Siemens contract.  As early as March 1, 2019, over one year ago, this was included for Upcoming Events:

The same’ Close Project…’ line showed up on future memos with new closeout dates,  month after month.  Scheduled to close out in June, July, September, November, then January 27, 2020.  But to my knowledge there has been no closeout, and nothing more has been mentioned since the January 27th date was listed.

The supposed closeout date for the Siemens project is almost one year late.  Siemens has been paid over $12 million of the $12.8 million dollar contract, but to my knowledge the project has not closed out.

This is per Public Works director Michael Leech in August of 2019:

‘The Annual Assurance Report and Measurement/Verification tests will not be performed until 1 year after the City has taken ownership of those items. That will take place once the project is closed out.  We will receive those in 2020”.

Which means we still have no way of knowing the accuracy of our new water meters or the quality of the work on the Wastewater Treatment Plant.  The register on our meter was already replaced earlier this year.  No matter when the project finally closes out, it will be another year before we know, 2021 at the earliest.

What’s Next?  Be On The Lookout…