The highlight of the December 17, 2018, Council meeting was the presentation a Bellaire Master Drainage Concept Plan, beginning with a proposed interlocal agreement among Bellaire, TX-DOT, and the Harris County Flood Control District.  Bellaire is located at the east/southeast terminus of various watersheds that flow into Brays Bayou.

Combined with upstream development to the west/northwest that drains into Brays Bayou. the loss of permeable areas, and changes in the area’s topography including the construction of Loop 610, Bellaire is now more prone to flooding.

The basis of this study is a 2016 drainage study by ARKK engineering.  You can find that study here: https://www.bellairetx.gov/DocumentCenter/View/18898/91916-Drainage-Study-Report?bidId= . Other Bellaire studies are also available under City Studies.


Council members also discussed the Special Lighting to be installed on Spruce and Fifth streets.  It’s in the project plans that will be presented on January 7, 2019, and apparently council members are already very familiar with those plans.  The question is whether they approve of them.

Bond funds that were intended for streets, drainage, water and waste water lines will be used to reconstruct Spruce/Fifth streets and drainage, all badly needed and the businesses agree.  But then hundreds of thousands more will be used for angled parking, special lighting, plantings, trees and irrigation – in an area of service businesses and across from the rear of a grocery store (at left).  Which begs the question, how is special lighting, etc., critical infrastructure, and what is the extra cost?

Several months ago the Pathways Plan was shelved.  Then came a proposal to spend $4 million dollars of the 2016 bond funds on stand-alone sidewalks.  Not combined with a new street o 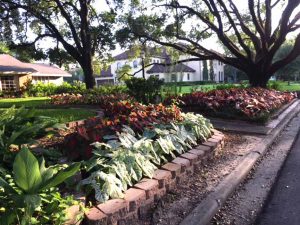 Many residents may not be opposed to sidewalks per se, but they love and value their front yards, their trees, hardscape and plantings.  Others felt more concrete would only increase flooding as more pervious areas were displaced.  Many felt the funds should be used to repair streets and drainage.


Had this proposal been reasoned and well considered and had residents been consulted,  the citizen response might have been less strident.  For future consideration allowances might be made for 3 foot wide walks in some areas, wide enough for a wheel chair.  Permeable installations such as crushed granite,  turfstone,

brick or permeable pavers might be allowed if they met  City specifications and they were paid for by the property owners.


Unfortunately these options were not considered, much less offered.  With safety as the catchword, the decisions by a majority of the members of City Council were (1) proceed with stand-alone sidewalks, (2) change

the standard width to 5 feet,  not for safety but so two people could fit, (3) concrete sidewalks only, no alternative paving would be allowed, and (4) eventually there would be sidewalks along both sides of every street in Bellaire.

Due to resident opposition the stand-alone sidewalk plan has also been shelved – for now.  However the 5 foot width is still the standard for sidewalks included in street construction and possibly when sidewalks are replaced.  Now a petition is in circulation to require a vote of the people.  Visit www.sidewalkchoice.com for more information.


Council members are elected to represent the residents, but both the pathways and sidewalk issues would have been less contentious if residents had been consulted before these decisions were made and costs were incurred.

Email your thoughts or opinions to the Mayor and members of City Council in care of our City Clerk, Tracy Dutton, at tdutton@bellairetx.gov and request that she forward to City Council.

Bellaire resident since 1956. Email: bellairebcc@gmail.com. Find more information on 'About This Site' in the main menu.
View all posts by Jane McNeel →
This entry was posted in Floods, Government, Public Works. Bookmark the permalink.