All That Debt – Where Has The Money Gone?

Even though many homeowners are recovering from the 2017 flood, and we still have lovely areas of homes lining shady streets, why do so many other streets and especially our main thoroughfares reflect a lack of maintenance?

Broken curbs, sunken pavement, patches of asphalt?  With all our debt, where has the money gone?  To some sort of vision that will transform Bellaire from a great little place to live into some sort of Sugar Land wannabe?  Meanwhile,  how many streets have been reconstructed, how many blocks of improved drainage have been added?

I believe the financial hole we’re in now began around 2005 – a $50 million bond issue, $41 million to streets & drainage and $9 million to municipal improvements. That’s when we needed to replace our old swimming pool, build a new fire station, and make repairs to the police station and city hall/civic center.

We wound up with a $3 million Aquatics Center, using $1.5 million of bond money and the rest paid by donations and grants. We also lost the 5100 block of Laurel including all the parking spaces along both sides of the street and in front of the old pool and tennis courts. Next was the Fire Station in 2010 for $4 million, also part of the same bond issue, and I believe that was a legitimate need. But by that time Bellaire’s property values were slipping after the 2008 housing market crash, so things slowed down for a while.

Then the debt spiral began. In 2013, voters approved $11 million more to build a new Police Station and City Hall/Civic Center. Arguably, the Police Station/Courts were due. But rather than address and correct the deferred maintenance for City Hall/Civic Center we just borrowed more money to build a new one.  Voters also approved $5 million for construction of Evelyn’s Park, and $500K for improvements to Nature Discovery Center.

Which brings us to 2016, and the City carrying $77 million in debt. We have a new City Manager and a new City Council. The market is back, property values are coming up roses – time for another bond issue – $54 million.  The chart at left is from a document distributed at a recent City Council meeting regarding the FY2020 proposed budget.  Follow this link for the rest of the document.


This is where questions of transparency really arise. Start with Proposition 1, $24 million for streets, drainage, and sidewalks. Historically when a street is demolished and rebuilt a 4-foot sidewalk was added down at least one side of the new street. But this Council decided to use $4 million for stand-alone sidewalks, not mentioned in the bond language. No street or drainage improvement, just concrete sidewalks in front yards. And they wanted them 5-foot wide where possible, and eventually on both sides of every street.  So far they are on hold.

Prop 2 was straightforward – more money was needed for the new municipal facilities – the Police/Courts and City Hall/Civic Center. $5.6 million more. The total bond funds approved for the facilities rose to $18.7 million, but there’s no telling what the final cost will be.  It’s over $20 million so far.

Then we come to Prop 3 for $24.38 million, styled as water and wastewater improvements. Half of that amount, $12.78 million, was used for a no-bid contract with Siemens for all new water meters in the City ($4.6 million) and for repairs and equipment for the wastewater plant which was in compliance with the state of Texas ($7.5 million), and $678K to Siemens for project design and management.  Click the graphic at right for information on current bond construction projects.


So only half the funds are actually going to new water and wastewater lines, though we’re told we need miles more of them replaced. Find more information here: https://www.bellairecivicclub.com/where-do-we-stand-with-the-siemens-contract/ 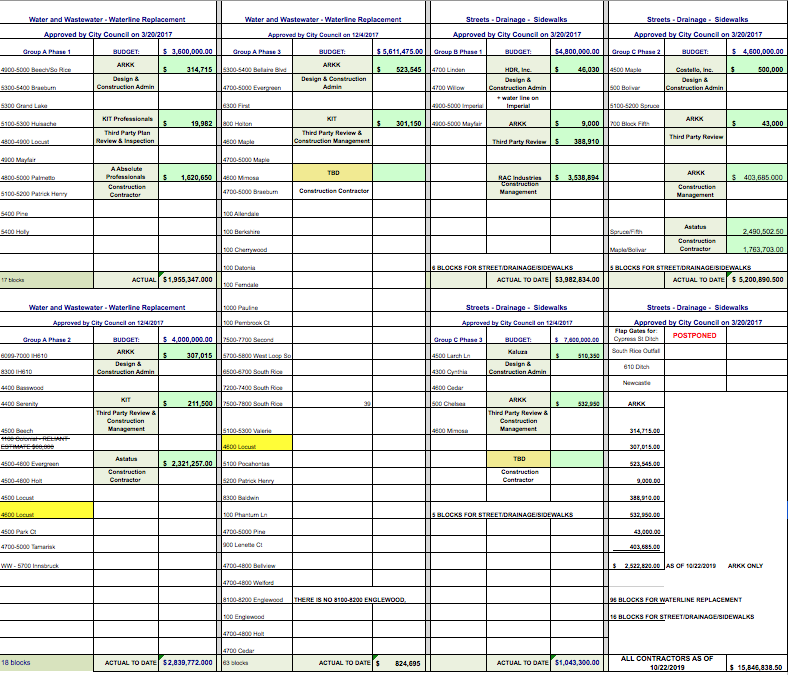 it, and our image has suffered. The remaining pot of 2016 bond money has been doled out to engineers and contractors for various projects.

My favorite here is once again from Prop 1 – the Spruce/Fifth ‘streetscape’ for $2.5 million base cost for the engineers and contractors, certainly much more before it’s finished. Located alongside and behind the new H-E-B.  With all our infrastructure needs, why was this approved?       https://www.bellairecivicclub.com/not-in-my-backyard/

Based on the actual figures from the Harris County Tax Office our property tax revenues increased from $15.4 million in 2015 to $21.9 million in 2019.  Over $6 million dollars in 5 years.   That’s a 42% increase!  Not including any increases in other revenue streams.  Where has the money gone?  Not to streets, drainage, water or sewer lines – that’s bond money, though close to $10 million will go to service the debt this year, partly from property taxes and partly from water bills.