NOTE: The State of the City Powerpoint presentation from February 4, 2019, can be found at the end of this article.

Although the 2016 bonds were promoted for the design and construction of streets and drainage systems with sidewalks on at least one side of the street, the $2.5 million dollar award to Astatus for the Spruce/Fifth project includes $360,449 just  for landscape and irrigation costs.

Further costs cannot be determined for the 7-foot wide sidewalks on both sides of the streets, curbs, angled public parking, decorative street lights, tree wells, etc. that are included in what is described as a street and drainage project.

The 5100-5200 blocks of Spruce and the area of Fifth by H-E-B will be narrowed to 26 feet and all traffic including large delivery trucks will be required to navigate the narrowed streets.  Access for our large emergency vehicles is compromised due to the numerous vehicles that will be parked on the right of way along Spruce and Fifth.  There are no fire lanes.

A recent presentation by business owners who have repeatedly expressed concern about loss of access, loss of private spaces, and disruption and harm to their businesses was apparently discounted or ignored.  H-E-B employee vehicles already fill the public spaces in the 5200 block of Cedar.


The project appeared to be underway well before the February 18th meeting – new utility poles were lying along Don Joseph’s salon on Fifth for several weeks, and surveyors were spotted at Spruce and South Rice at least a week prior to the meeting.  After the February 18th vote City Council members read from prepared remarks, decisions were already made.  Once again a lack of transparency has been mentioned by residents.

From the State of the City presentation on February 4, 2019

Many residents have questioned the wisdom of Council spending bond funds to beautify a commercial street running behind a large grocery store even as another $47 million dollar bond issue is being discussed for the City election this Fall.

Bellaire’s current debt is estimate to total $129 million, not including interest, on September 30, 2019, the end of the current fiscal year. We have one of the highest debt-per-capita ratios in the state, about $ 6,800 per person. (See chart at left.)

The video is available here.  The full Agenda for February 18, 2019 can be found here.

Regarding questions about James Andrews/ARKK as the City Engineer, follow this link: 2018-2019Agmt-ARKK Engineers LLC – 2018-2019-1 Mr. Andrews is a principal with ARKK Engineers.

To date ARKK has been awarded over $2.5 million dollars in contracts for the current list of projects under 2016 Bonds for Better Bellaire Proposition 1 – Streets, Drainage and Sidewalks, including $446,000 in awards for the Spruce/Fifth-Maple/Bolivar project.

STATE OF THE CITY PRESENTATION 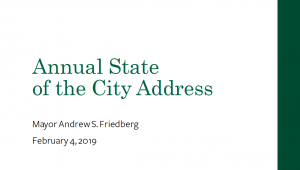