But that’s not the whole picture.

Total debt service in 2020 will cost us $9.7 million dollars!  It is a major cause of our funding problem, consuming almost half of the anticipated property tax revenue of $20 million.

Paul Hofmann, the City Manager, wants a million dollars of this proposed budget to plan another $40 to $50 million dollar bond issue for 2020!  Just how is that million dollars to be spent?  What sort of debt service will the City face with another large bond issue?  What if the City suffers from another flood or a downturn in assessed property values?

Residents are warned of a shortage of funds by 2024, thus we may see an 8% property tax increase for this year and 3.5% maximum increases in future years.  Water and sewer rates are proposed to increase 8% to 10% annually for the next several years.  What happened to all that promised revenue from the new water meters?  Increases in City fees will be studied – by paid consultants.  All on the shoulders of Bellaire residents.

Isn’t it time to actually budget?  At a personal level it’s called living within our means while saving for the next rainy day.  Or possible flood.  Not living on credit.  That does not seem a part of this City Manager’s long-term financial planning, and City Council tends to follow along.  Which is why many Bellaire residents are calling for a change in leadership.

Speaking of leadership, at the request of the Mayor Mr. Hofmann submitted his $1.4 million dollar list of suggested budget cuts.  Find it here.

His main targets are the City Library and Parks and Recreation.  Our Library, the heart of the City, would lose our youth Librarian and a Library assistant, Library summer programs, the purchase of children’s books, and more. Parks and Recreation would take a hit, too, with closures and shorter hours (Rec Center open at 3 PM and closed on Saturdays), cuts to special events, cuts to staff, etc.

The Assistant City Manager position would remain unfilled. Unlikely, since that’s part of the City Manager’s power base.  And Public Works will have to do without a new position for a project manager.  That’s the best he could do.  What a sad, awful list.  No wonder we’re in trouble.  All this leads me to reflect on how the City survived on so much less for so long – until we got a new City Manager.

Based on the actual figures from the Harris County Tax Office our property tax revenues increased from $15.4 million in 2015 to $21.9 million in 2019.  Over $6 million dollars in 5 years.   That’s a 42% increase!  Where has the money gone?  Not to streets, drainage, water or sewer lines – that’s bond money. Almost half of it has gone to service our bonded debt.


Our appraised property values have appreciated and Bellaire’s property tax revenue for 2019 may increase by about $1.3 million. Where did that extra $6 million dollars go? Not to streets and drainage – that’s all bond money. Not to water or sewer lines – that’s all bond money, too.  See the chart below to track changes in spending in the General Fund. 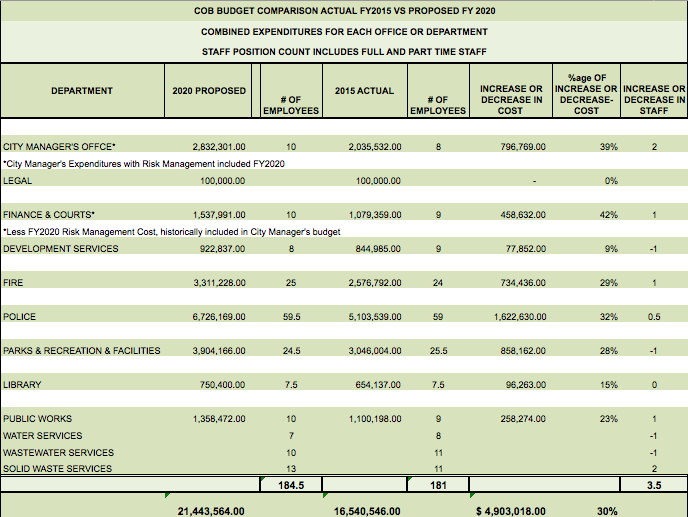 City staff has grown by 3.5 employees over the past 5 years, including 2 additional personnel in the City Manager’s office.  A question: Why did we need a new position for a $98,000 Community Relations Administrator?

The Finance Department added 1 employee.  Do we need a Chief Financial officer, an Assistant Director of Finance, a Senior Accountant, and a Senior Management Analyst?  Plus purchasing, payroll, and payables staff?

Development Services staff declined by one employee.  Rather than hire more building officials the City pays outside firms.  The City Manager has disputed complaints about the number of consultants hired by the City.

In reality, most of our maintenance is outsourced, the City uses consultants and contractors for everything from water line installation and street repairs to lawn mowing and window washing.

Regardless of the increase in the number of consultants and contractors, the number of staff has expanded.  City Department costs have risen by almost $5 million dollars (30%) over the past 5 years (see the chart above).  In a town of 18,000 residents living within a 3.3 square area.  Here’s the staffing list for 2020.

Reduce the budgets by 10% in every department.  Cut the number of non-production employees, either by attrition or retirement if possible, and stop creating new positions.  Cut the wasteful spending.  Just because it’s not your money doesn’t mean you can waste it!

Cut contractor costs by 10%.  Same thing for professional services.  Services for what?

Unlike a vehicles that have been paid for but may have years of service remaining, the City will have to lease the vehicles until they are replaced by the next leased vehicle unless some sort of lease/purchase option is negotiated.  No chance to catch up or replenish the Vehicle and Equipment Replacement Fund.  How many City vehicles are actually no longer serviceable?  (Update: The average life of a new vehicle is 150,000 miles, 8 to 10 years.)

Stop leasing vehicles, which sets up a never-ending demand for payments.  Make do with the current fleet and purchase vehicles, financed if necessary, that can remain in service for years after they’re paid for.

As an example, here’s how West University budgets for their Vehicle funding.  No leases.

Why would we need an “automated dispatch system” at a cost of $500,000?  That’s another of the City Manager’s proposals for future spending.  Will it replace our human dispatchers?  Or just pile on another cost and more maintenance?  Again – we are a small town with a population of 18,000, living in a 3.3 square mile area.

Why are the unnecessary ‘seasonal’ banners that hang from streetlights along Bellaire Blvd still included in the budget – $39,000?

View the Consolidated Financial Statement with CIP explanation here.
(pg 39-41)  That’s where the extra million dollars to plan another bond issue is buried.

If our finances are so critical why did the City Manager recommend these items in the past few years?  And why did City Council approve them?  Did we need them?  Based on the repeated discussions of infrastructure problems over the years, were any of these projects fiscally conservative?

Email the Mayor and City Council via our City Clerk, Tracy Dutton, at tdutton@bellairetx.gov and request that your email be forwarded.