Open Letter – Bolivar, A Double Standard. Is It Time For A Change?

The City Manager’s weekly memo of 2/14/20 contains another memo, from project manager Joseph McMillen to Paul Hofmann. Mr. McMillen addresses the Bolivar Street and Innsbruck Street projects, trumpeting the quality of the work while disparaging the protests of the residents who apparently didn’t realize their streets had so many problems. The City’s main complaints about Bolivar seemed to be that it was too high and too flat.

Mr. McMillen’s rationalization for what has taken place on Bolivar is astonishing. A lovely tree-lined cul-de-sac, one block long, lightly traveled, minimal flooding, has been decimated. The pavement is lowered one to two feet in some areas, concrete retaining walls replace curbs, and the root systems of decades old oaks have been severely damaged. If I came home to that view every day I would feel sick to my core.

Mr. McMillen states that all projects are built per the design plans, but then goes on to explain, amidst construction jargon and allusions to ADA, that the plan for the ‘curb wall’ on Bolivar came later in the process. A ‘non-traditional approach’ was required. To protect the root structure of the trees. No photos were included, but a quick drive along Bolivar will provide evidence of the protection afforded to the trees – and the irony of Mr. McMillen’s explanation.

But what caught my attention in this memo was the requirement to widen Bolivar to the new street width of 28′, in accordance with the ‘City’s design standards’. I assume Innsbruck was narrowed to 28′, he does not say. That completed street appears to be a mix of old and new pavement, though maybe it’s just that it took so long to complete. It is part of another bond project for waterline replacement. 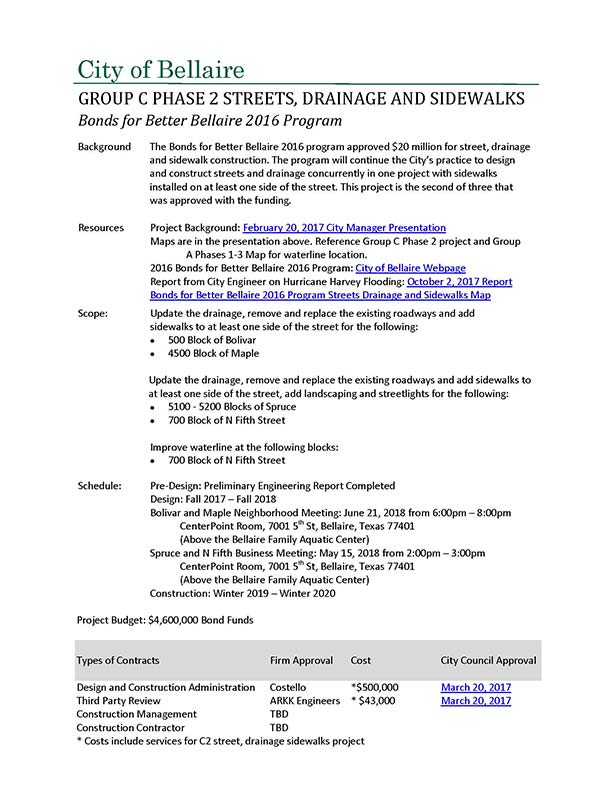 Here’s the thing – Bolivar/Maple and Spruce/Fifth make up Group C Phase 2 of the 2016 Bonds for Better Bellaire projects. The final cost to taxpayers is $5.2 million.

Then why do the plans for Spruce and Fifth, the highly traveled commercial streets in the middle of downtown, call for 25′ wide streets?  Where’s the City

Let’s see – standard street width = 28′ plus two 7′ sidewalks = 14′. We’re at 42′, leaving 18′ for angled parking. Most 2020 full-size pickups are over 20′ long. A Chevy Suburban is almost 19′ long. So many of the vehicles popular with residents won’t fit in those angled parking spaces. (The angled parking area in front of City Hall is 25′ deep.) I’m certain that Mr. McMillen and Mr. Hofmann will have plenty of excuses if modifications of any City plans or standards are required for the City Manager’s beautification plan on Spruce. But they made sure that Bolivar suffered the consequences of those standards.

The recent City election showed the level of resident dissatisfaction with the current direction of City management and City Council. I believe it’s time for some changes in City personnel, starting at the top. City Council has the power to make that change.

February, 2020: Still no written verification.  Read about the City’s failure to verify references. for A Status Construction, LLC.

Here’s the link to that Weekly Memo

The Red Arrow points to the specified street width of 25 feet for Spruce. The same 25′ width is shown for Fifth along H-E-B. 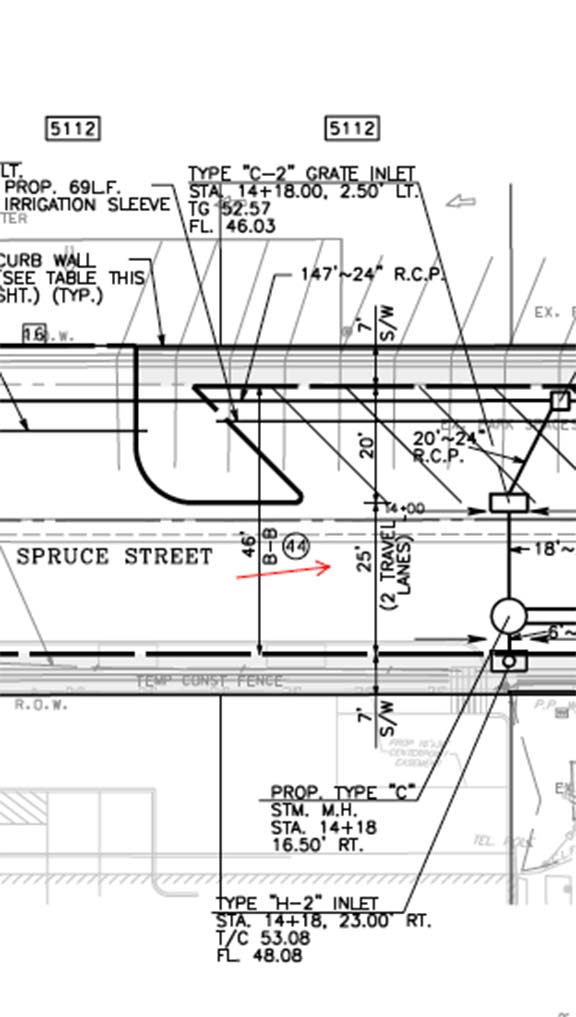 Bellaire’s Debt is $127.5 million at the end of FY2019, one of the highest per capita in the state.  Another bond issue is under discussion for 2021.  Find Bellaire on the Texas Comptroller’s list for 2018; more bonds have been sold since then: https://comptroller.texas.gov/transparency/local/debt/city.php?cityname=Bellaire&citysubmit=GO