UPDATE 9-30-2019:  After cutting some expenses and moving amounts from one account to another, the City Council essentially adopted the budget submitted in July.  Less than $200K in spending cuts in a $46 million dollar budget.


We learned from the third budget session, held on August 26, 2019, that our appraised property values have appreciated and Bellaire’s property tax revenue for 2019 may increase by about $1.3 million. The City Manager announced that this allows a decrease to a 7.1% tax rate for 2019.  It seems that no matter how much revenue this city takes in, it all gets spent – and then some.


Neither Neil Verma nor Gus Pappas had any concrete suggestions to cut costs, Michael Fife admitted that she was not clear on the ‘budget things’. Trisha Pollard was absent for the meeting.

David Montague suggested a 3.5% tax rate for 2020, and had a list of suggested cuts that would reduce expenditures by $600,000. He also mentioned the hundreds of thousands of dollars the City pays in incentive pay and a consistent number of vacant staff openings.

Pat McLaughlan’s focus included City vehicles, which is a legitimate concern since the Vehicle Fund expenditures FY2020 total $1.68 million, with many of the costs for leases. We now lease vehicles instead of buying them. He also suggested that it might be time for a new group of engineers who may be happy to reduce their fees. 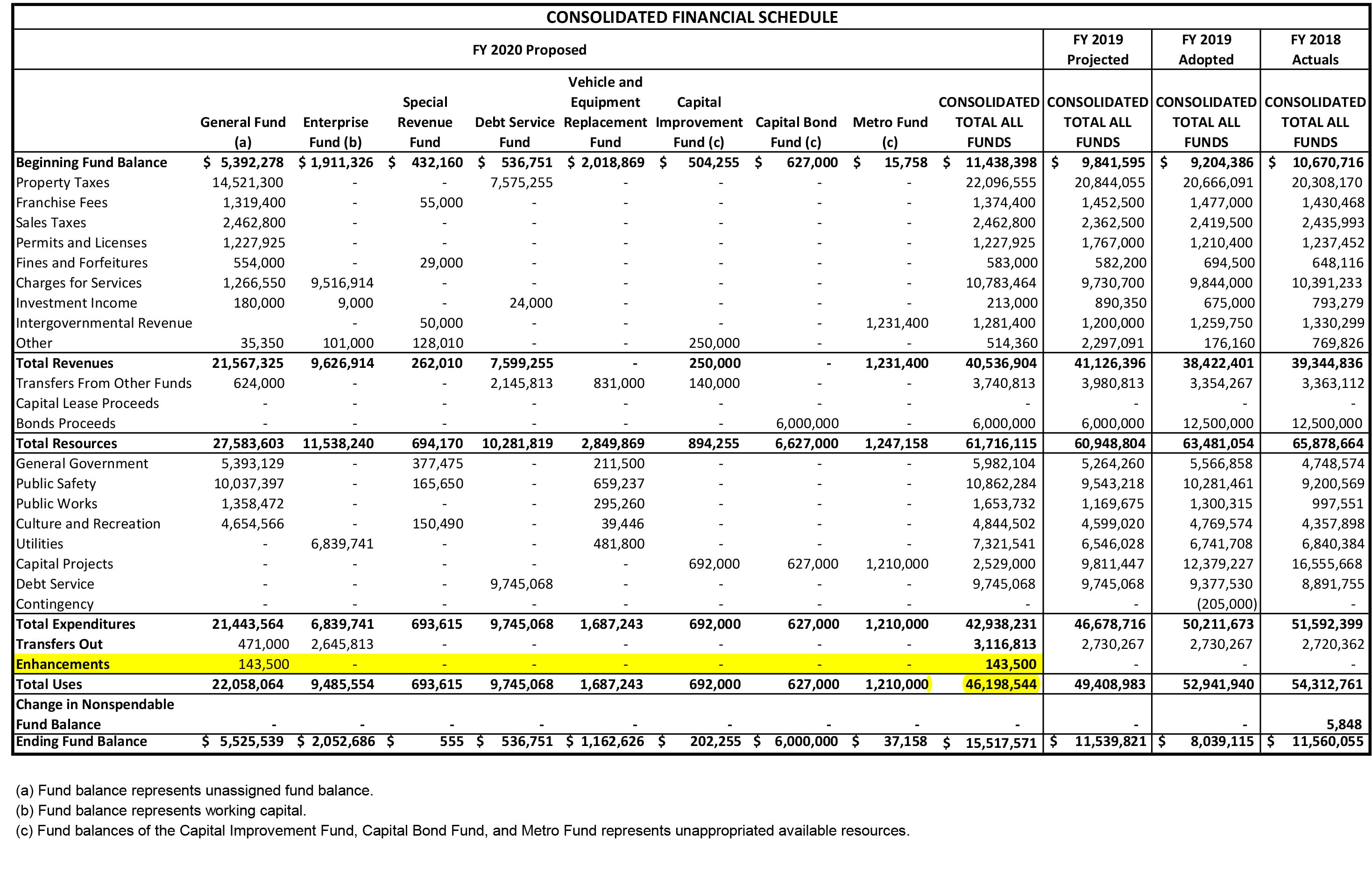 When Pat McLaughlan returned to a suggestion from an earlier meeting to scrub the budget line by line for every item above $100,000 the City Manager was incredibly rude to him, with the Mayor not far behind. In some cities the City Manager would be on his way out the door, but not with this Mayor and  City Council.

The Mayor and Mr. Hofmann then agreed that another position, in Facilities or perhaps Public Works, was a good idea. So much for any thought of decreasing the number of City staff.

Optimistic was the operative word of the night.  Let’s not try to seriously cut costs or staff, let’s not plan to save for capital improvements or even a rainy day.  Let’s add to staff and continue to discuss another bond issue. Another pot of money for the city manager to generously disburse, and residents to pay back – with interest.

We’ll see how far the suggestions from Mr. Montague and Mr. McLaughlan make it. Bottom line for me from the third Budget Session – Tax and Spend.

My email sent to the Mayor and Members of City Council prior to August 26 Budget Session.  No response.

Our bonded debt will increase to $126.6 million by the end of FY2020.  We will owe close to $10 million in debt service, almost half of the anticipated property tax revenue of $21.8 million.

Watch video of the Meeting here