Say So Long To Our City Logo – What About Our City of Homes?

Thanks to Mike McCorkle*

For some time I have felt that Bellaire has an image problem, especially after the Harvey floods. Now I realize that the problem began much earlier, when we lost our City logo and our city motto: City of Homes.  We no longer have a welcome sign on Bellaire Blvd, either, in fact we have no sign at all to show we are the City of Bellaire.

The logo could have been updated to reflect our changing social mores, however that was not an option.

These symbols are going or gone from Bellaire, leaving us with little  sense of the special place where we live. I decided to send an email to the Mayor and members of Bellaire City Council to verify what has occurred.

Only Mayor Friedberg took the time to reply, and at his suggestion two members of City staff responded, not a word from the other six Council members.  Notice the lack of common courtesy in City Manager Hofmann’s reply, the last piece of correspondence:

Our City seal has been removed from numerous City vehicles and now from most of our printed matter.

If not, please advise who made the decision to do so, and on whose authority. 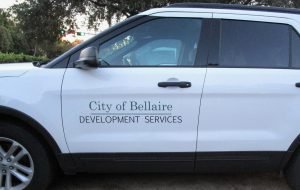 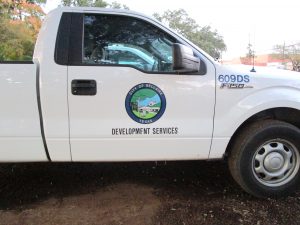 No, the old city logo has not been removed from existing vehicles and printed matter.  What you’re seeing, and as was presented and discussed extensively, is that the new visual identity approved by Council is being implemented only as items are replaced in the ordinary course.  I’m copying Paul and Cheryl who can confirm that, as well as answer any other questions you may have.

The City Council voted unanimously on March 5, 2018 to adopt the new typography and verbal identity, not including the use of a logo.  Also, on May 3 the City Council received an update on the vehicle decal for new vehicles that were on order at that time, and which you’re now seeing out on the roads.

Thanks and best regards,

In answer to your question concerning the logo, I have put together a background summary of how we came to the implementation of the adopted typography and verbal identity.

This information below was taken directly from the March 5, 2018 City Council Minutes:

Cheryl Bright, Administrative Services Manager, introduced the agenda item to members of the Council.  She stated that the City of Bellaire entered into a contract with Design by Principle in April of 2017 to evaluate and articulate the City’s sense of identity for both visual and verbal perspectives.  The resulting brand identity package was presented to City Council for review on January 22, 2018, with three elements as follows:  the verbal identity, the typography, and iconography (logo).  On February 19, 2018, City Council came to a consensus to consider only the typography and verbal identity this evening.

Depending on the outcome this evening, Administrative Services Manager Bright advised that the City would plan to use the typography and verbal elements to help the City to create a brand identity implementation plan.

To formally adopt (1) the verbal identity produced by the branding exercise, and (2) the recommended typography system for the City including for signage in the new municipal buildings.

From this council direction, I have been working to develop a brand identity implementation plan that incorporates the usage of the font, color and verbal identity.  Please see the presentation attached for examples of how this has been and will be implemented in the future.  This includes vehicle decals, staff uniforms, stationery, business cards and more.  It was explained that while we will not be utilizing the existing logo in the future, we were not removing it until there was a need to replace an item such as a vehicle decal or a piece of stationery.  For example, the existing logo will remain tiled in the floor of the lobby of the Recreation Center, on manhole covers and in many other locations throughout the city until there is a need for replacement.

I have also attached the memo to City Council that outlines an implementation strategy and the presentation from the March 5, 2018 City Council meeting.

Please let me know if I can be of further assistance.

Have a good evening. 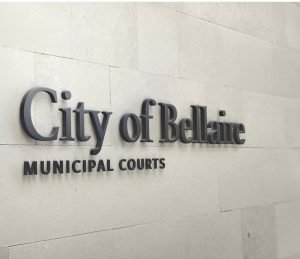 This is a very sad end to another part of Bellaire’s history, Cheryl.  It’s been coming for some time due to the decisions of members of City Council.

Our identity and our image as a City of Homes are gone, many of our residents feel abandoned and ignored, and along with many others they no longer enjoy the sense of living in a small town.

We will become just another Houston suburb.

It’s not my place to suggest how people should feel.  I will suggest that there is no reason for Bellaire residents to feel abandoned and ignored.  There is much evidence that this City Council and the Bellaire staff don’t ignore Bellaire residents.  I witness every day the responsiveness and quality work of hard working city staff.  Every Council meeting provides evidence of just how much public input matters here.  Council Members are engaged and involved in the community.  City sponsored events are filled with families having a good time.

This community took a hard shot from Harvey, and yes with a lot of support and hard work from its local government, will recover completely and not lose its fundamental identity, which can never be simply wrapped up in a logo.

For whatever it’s worth, I regret that you and others feel sad.  My staff and I will continue to consistently and responsibly do our jobs, respond to questions and concerns, and happily follow Council’s direction.  I’ll also be an advocate for how wonderful Bellaire is, and appreciate the good value Bellaire residents get for their tax dollar, because it’s the truth.

One more thing – remember that $50,000 leaf logo from Mr. Hofmann’s chosen design team?  Check out Google images b with a leaf logo
Of course we have our extraordinary green font.

Email City Council in care of Tracy Dutton, our City Clerk, at tdutton@bellairetx.gov