Hopefully City Council’s unanimous decision at the November 16, 2020, meeting to deny the zoning applications by Evelyn’s Park Conservancy for the commercial parking lot at 4300 Bellaire Blvd will lead to the removal of that lot. If you are not familiar with this parking lot issue find information here.

Remarks of Bellaire residents at this meeting and at a previous Planning and Zoning meeting made it clear that lack of transparency surrounding the deals on this parking lot among Evelyn’s Park Conservancy, CenterPoint, and Southside Commons, aided by City of Bellaire staff, has led to stress and dissension among neighbors and to resident disgust, anger, and suspicion of the City and the Conservancy.

With the perception that members of the Conservancy pursued an elitist policy to change City zoning laws throughout the City in order to suit their own ambitions, many residents have soured on Evelyn’s Park and Evelyn’s Park Conservancy.  The lack of concern about the negative impact on quality of life and property values of the Park’s neighbors has not been forgotten, either.

Residents questioned where the City’s allegiance lies, with the rights of Bellaire residents or with the members of Evelyn’s Park Conservancy?  Is the City concerned about enforcement of our zoning laws, or with the return on investment for Evelyn’s Park?  And about the future objectives of the Park and the Conservancy.

When first proposed in 2011 Evelyn’s Park seemed to be a win/win for Bellaire residents and the Park’s donor, the Jerry and Maury Rubenstein Foundation. It would provide a high quality urban park and/or open space for the use and enjoyment of residents of the City and visitors to the City.

The Foundation would donate the property and, working with the City, raise funds to build that high-quality park. The Foundation, through a tax-exempt organization, Evelyn’s Park Conservancy, would design and build it. Perhaps a close reading of that first agreement shows that future decisions would lay with the donors. The Conservancy would have the say on the design, development, and operation of the Park.  The City would pay for the hard costs of construction and future maintenance and upkeep.

By 2014 the Conservancy had provided the plans and the City agreed to hand over $5 million to build the Park, but the control always seemed to remain with the Conservancy.

Now, in 2020, residents are questioning the Park’s purpose in the City.  Was it planned as a quiet refuge, a gathering spot for Bellaire residents?  Or as some sort of clone of Houston’s Discovery Green?

Who decided that this park had to be a ‘venue’, a ‘destination’, a ‘profit center’? Accommodate thousands of visitors to an event, as suggested by Lou Waters, a member of  the Evelyn’s Park Conservancy Board, at the August 13, 2020, P&Z Hearing.

Why should it be the recipient of a large part of the budget for City park expenditures, and of private fund-raising as well?  Of interest, a few years ago when I requested a list of vendors and expenses for Evelyn’s Park I was advised that a separate account is not maintained for the Park, or any City park.  Although I finally received a list, it’s next to impossible to get an accurate accounting of how much the Park costs the City each year.

And how does the lack of adequate on-site parking affect the Park’s visitors and neighbors?  We know about the No Parking signs at the townhouses off Newcastle and complaints from the folks on Camellia.

Is this fair to our residents?  Where do residents and the Evelyn’s Park Conservancy rate in the City’s priorities?

Evelyn’s Park sits on 5 acres of the original 10 acres purchased by Edward Teas, Sr. around 1908 at the corner of Bellaire Blvd and Avenue A (now Newcastle).  Later Teas nursery was established on the acreage, and remained in the Teas family for the next 100 years. In 2002 half the land was sold to home builders.  The remaining 5 acres of land was sold in 2010 to Jerry and Maury Rubenstein.

The Rubensteins established the Jerry and Maury Rubenstein Foundation (the Foundation) and then approached the City of Bellaire with a proposition to donate the acreage to the City as a park to honor their mother, Evelyn Rubenstein.  A Memorandum of Understanding had been signed by all parties in December of 2010.

For brevity you’ll find highlights of each agreement between the Foundation and the City of Bellaire, but I strongly suggest readers review each document.  Links are included for each agreement.

The first agreement, an Agreement Concerning Evelyn’s Park, Bellaire, Texas, by and among City of Bellaire, Texas, and The Jerry and Maury Rubenstein Foundation, Ordinance 11-010, was approved by Bellaire City Council on February 21, 2011. Included were recitations stipulating that the land would be used for park and recreational purposes.

The City promoted a $16 million dollar bond issue, including $5 million for the Park.  Voters approved the bonds on on November 5, 2013.

The Foundation established Evelyns Park Conservancy (EPC), a 501 (c)(3) non-profit.  The Board of Directors would consist of eight members, four of whom are appointed by City Council and four by the Foundation. (The only financial information EPC is required to release to the public are 990 returns. Here’s the latest, 2018, for EPC.)

On June 16, 2014, after the formation of EPC, the Rubenstein Foundation and the City of Bellaire entered into several agreements, the first an Agreement of Modification of Donation Documents.  Find that agreement, Ordinance 14-033, here.  Highlights: 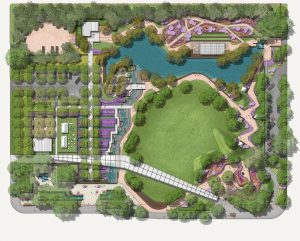 This was promoted as the Master Plan Phase I, but it is not what we see today.

A Master Plan for Phase 1 was approved by the Foundation.

City to sell $5 million in bonds and deposit the money in a City account titled “Evelyn’s Park Account” for the construction of the park improvements.

City would collaborate with the EPC to obtain all construction documents for Phase 1, enter into a construction contract for the construction of Phase 1 by January 31, 2016.

The City and the Conservancy binding Development and Operating Agreement (the ” City-Conservancy Agreement“). An overview:

The final agreement on June 16, 2014, between City Council and the Rubenstein Foundation was the Development and Operating Agreement for Evelyn’s Park, Bellaire, Texas.  A very important document!  Highlights:

Because even the brief highlights are lengthy, click on the link Master Plan for those.  Better yet, the full agreement can be found here.

The grand opening for Evelyn’s Park was held on April 22, 2017, and was well received. A new restaurant opened, The Ivy & James at Evelyn’s Park, in a new building designed to emulate the original yellow house built by the Teas family but demolished during the park construction.

Since the 2017 opening the original restaurant has changed hands, two executive directors have resigned, and a search is on for experienced candidates to fill that position.  Due to the Covid-19 crisis few programs or events have been offered in the past nine months.

In early 2020 a parking lot was constructed on land located in a residential area at 4300 Bellaire Blvd.  EPC had leased the property from CenterPoint in 2017 and then subleased to Southside Commons, a commercial development in Southside Place, in 2019.  Southside Commons built the parking lot.  The premise was that parking would be available at certain times for Evelyn’s Park.

On March 26, 2020, the City sent a letter to the parties involved, advising them that the lot was non-compliant and would have to be removed.  Eight months later the the lot is still in place and unused.  On November 16, 2020, Bellaire City Council voted 7-0 to deny a rezoning request from the Conservancy that would have allowed the lot to remain for commercial use.  No resolution on removal of the lot was discussed.  Find more information on the parking lot here.

On October 5, 2020, a representative of the Evelyn’s Park Conservancy presented the 3rd quarter 2020 report on the Park.  Included were concept plans for Phase II of the Park Master Plan.  Among other amenities Phase II includes a covered seating area along the south side of the Park, a splash pad, and shaded sitting areas.  Mention is made of considerations regarding the cost for maintenance. Estimated cost for Phase II is $4 million, to be paid from private funds.  Construction is scheduled to begin in December, 2020.

Email the Mayor and City Council via our City Clerk, Tracy Dutton, at tdutton@bellairetx.gov and request that your email be forwarded to them.

2. Bond Issue. The City shall issue and sell the $5,000,000 of Park Bonds and deposit the entire $5,000,000 in a segregated account of the City for use exclusively for the construction of Phase 1

5. Development of Future Phases of Park Improvements. EPC may initiate development of future Park improvements to be submitted to the City Council for review and approval as part of the City’s Master Park Plan. The City shall have no obligation to fund any Future Phases.

a. A City Representative may attend an EPC Board of Directors meeting once a year and submit to the City the following reporting:

b. The City has the right, at its expense, to audit the Conservancy’s books once a year.

The Conservancy has the right to designate financial information relating to its internal administrative and operating expenses, including but not limited to salaries and benefits for its employees, as proprietary, confidential financial information that shall not be subject to public disclosure under the Texas Public Information Act.

8. Notices. Any notice, consent, approval or other communication required or permitted to be given under this Agreement( a ” notice”), in order to be effective, must be in writing

9. General Provisions. No Party shall assign its rights or obligations under this Agreement except with the prior written consent of the other Party. Each Party shall have the right to enter into contracts with independent contractors for such Party’s performance of its work in the Park.  All prior negotiations, representations or agreements not expressly incorporated into this Agreement are hereby superseded and canceled.