UPDATE: Recent information has been received.  Find out what streets in the Group D Phase 1 and Phase 2 are approved for sidewalks and what streets have been removed.   Read it here.

A few weeks ago, out of the blue, 4 members of Council chose to ignore the Bellaire residents who spoke out against the Pathways Plan and others who spoke against sidewalks in their front yards. By their vote to add 5 foot wide stand-alone sidewalks and even more concrete to our City those 4 members also turned their backs on the many residents who fear another flood. How much more concrete will cover Bellaire with 5-foot wide sidewalks? Or with more sidewalks, period?

For every expert who claims concrete sidewalks and the removal of vegetation do not exacerbate flooding I can find another one who says it does, and who is not on the City payroll. Experts from Texas A&M, Brown University, Georgia Tech, and Rice University, among others.

Where Were The Stand-Alone Sidewalks? 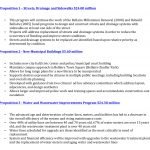 Where in the description from Proposition 1 of the bond issue – ‘to design and construct streets and drainage systems with sidewalks on at least one side” did you hear or read that $4 million dollars would go to stand-alone sidewalks to be retrofitted into residential front yards?

Easy answer – you didn’t. It’s called bait and switch. Conceal City Hall’s backroom plans in vague and innocuous language. The true objectives are buried in the altruistic language – rebuild streets, construct drainage systems, reduce flooding. There was nothing that stated a portion of that bond money would be used for stand-alone sidewalks. Residents were not consulted, advised, or given that option.

And what about the debt that’s funding these projects, the Bonds for Better Bellaire 2016? Almost $54 million dollars approved in 2016. What has been accomplished with that pot of money in the past year and a half? According to the June 30, 2018, financial statement millions of dollars has been paid to Siemens, construction continued on the new municipal facilities, and water line replacement was in work for four (4) City blocks.

A year after the flood, with tens of millions in bonds unspent, no street or drainage construction has been undertaken. Why? Maybe because those projects would have included new 4-foot sidewalks. Which we now know are not favored by the City Manager, the City Engineer, and at least four members of council. They favor wider sidewalks and higher costs. Concern for the streets, drainage, and flooding issues appear to be lower priorities.

The Next Bond Issue 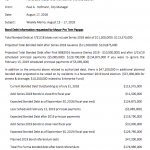 Even with that pile of money still sitting there City Council and the City Manager are working on another bond referendum for next year – about $50 million dollars. If it passes our debt will soar to new heights. Other cities work to pay down their debt, we just borrow more. We already pay out almost 25% of our annual budget on debt service.

Bellaire has prospered for over 100 years without sidewalks on every street, and we certainly have much greater needs to address. When we could all be working together to support the residents who suffered losses in the floods, to promote an image of a City working to improve our aging infrastructure, to mitigate the damage from another flood event, and to reassure the world that our City is a great place to live, we have become a City divided.

Bellaire residents wrangle over costly and unnecessary branding studies and logos, pathways and sidewalks. There always seem to be winners and losers. Residents talk about leaving. You have to wonder, what’s the next City project that is designed to create controversy? How did we reach this point?

Most of the responsibility rests with some members of City Council, who spend little time exercising due diligence or examining and discussing the consequences of their decisions. We have a City Manager who appears to be a de facto city planner rather than an administrator. 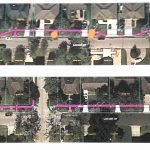 Layout for 4 ft sidewalk. Orange trees to be removed.

So now we’re arguing over 5 foot wide sidewalks, an issue that supposedly had been decided by Council last December when Building and Standards recommended a 4 foot width, which has been the residential standard for many years.  And over mysterious and misunderstood stand-alone sidewalks that we are told were approved in the last bond issue.

We already have sidewalks along major thoroughfares. Building sidewalks in residential areas does nothing to improve property values or to boost resident satisfaction. It just pulls funds away from our worn out streets and aging infrastructure. The street and drainage projects that were supposed to include 4-foot sidewalks. 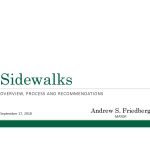 During the September 17th meeting, after a sensible, reasoned presentation by Mayor Friedberg promoting his preference to hold off on more sidewalk decisions and solicit community involvement in an effort to formulate a comprehensive plan for sidewalks, Council simply moved ahead on their own.

As in an earlier meeting, after numerous residents voiced their objections in person, via emails, and with signed petitions, Council chose to move ahead on an ordinance to approve the contract for construction of Group D Phase 1.  By a 6 to 1 vote (the Mayor was the no vote) they approved contracts for over $1.5 million to construct stand-alone sidewalks.  That cost may or may not be lowered since at this point it is limited to only the streets inside the Loop.  Those streets outside the Loop are in flux.

Council members chose to place more reliance on an unofficial pro-sidewalk online petition (I think my feral cats Ruby McNeel and Woody McNeel could have signed it) than on the residents who actually took the time to show up and speak to the issue.

One concession was to retain the 4 foot width for those projects already presented to residents. Otherwise Council wants all sidewalks to be 5 foot wide in residential areas. And they want the stand-alone sidewalk projects to continue to other streets in Bellaire. Paid for by the very residents who oppose them.

Apparently our mounting debt is of no concern, since the news about a lower tax roll valuation leading to a higher tax rate didn’t seem to have any effect on the Council.  We can’t afford to build a new Library but we can spend $4 million on these sidewalks. Then next year let’s terrify residents with tales about the terrible condition of our infrastructure so they’ll vote for another $50 million dollar bond issue.

Another curious item is this obsession with solidarity. Why is it important for Council to always be in agreement, to present a united front?   A closed system isolates ideas, excludes an open dialogue,  and limits communication. It’s a bad idea.

If this council is so determined to continue to build sidewalks, I suggest they only build them on streets where 80% of the residents request them.  Another City Council meeting is scheduled for September 24th at 7 PM, and a third on Monday, October 1st.

I don’t know how this will shake out, but Bellaire residents are beginning to take notice and many of us have long memories that will stretch into next year’s election.

If you oppose stand-alone sidewalks and feel we have better ways to spend $4 million dollars please sign this petition: https://chn.ge/2OANrJG

Email your comments to the Mayor and City Council via our City Clerk, Tracy Dutton at tdutton@bellairetx.gov