Many Bellaire residents point to the Rice Village as an example of small shops and boutiques in West University. It is not.  The shops and the huge apartment complex are in Houston.  West University would not allow that huge mixed-use multi-family structure in their city.  In fact West U allows no multi-family, and nothing over 2-1/2 stories.  Bellaire?  Not so much.  Please, read on.  This article was updated on July 24, 2020.

The Bellaire Planning and Zoning Commission will be making decisions and recommendations on a number of important zoning matters in the new few months.

1) The currently illegal parking lot at 4300 Bellaire Blvd, built in a residentially zoned district just inside the City limits at our main entrance.  If allowed to remain, what does this say about Bellaire?   (more information can be found here)  A Public Hearing before the Planning and Zoning Commission is scheduled for Thursday, August 13, 2020. UPDATE 6/20/2021: The lot has been removed.


2) The HISD request to build two baseball fields on the old Gordon/Kolter Elementary land. Up to 51 trees may be removed.  It will soon be scheduled for consideration and approval by Bellaire City Council. (more information can be found here) UPDATE 6/20/2021: The lots were approved and are under construction.


3) A new ordinance is under consideration for the SLS Properties tracts (the old Chevron land) situated at 610/Fournace/South Rice.  NBSD – North Bellaire Special Development District (more information can be found here)  UPDATE 6/20/2021:  The ordinance was approved with a few amendments.


4) Meanwhile SLS Properties has begun construction on a proposed multi-story parking garage adjacent to the existing office buildings on the site.   UPDATE 6/20/2021: The garage is almost complete.


5) Plus a request by O’Reilly’s Auto Parts to the Board of Adjustment for a variance to construct a new building at a height of 19 feet, rather than the 30 feet as required by Section 24-547 C. (3) d) of the City of Bellaire’s Code of Ordinances. UPDATE 6/20/2021:  The request for a variance was refused.

Who knew?  A minimum height requirement slipped in to the UV-D at the end: “Minimum building height: 30 feet, which shall include at least two working stories for all portions of the building situated at the front building line”.

There’s a requirement for at least 75% of the front of a commercial building to begin at the property line.  Just one more insult to the residents and businesses in the area around Spruce and Fifth.  Why are we so out of step with our neighboring communities?  This isn’t downtown Manhattan.  Isn’t it about time to review and rewrite the entire ordinance?

Some History On Our P&Z

Planning and Zoning ordinances are the result of decisions made by the Planning and Zoning Commission,  which is comprised of Bellaire residents who volunteer to serve on the commission and are approved and appointed by the mayor and city council.  The final decisions are the charge of the City Council.

Commissioners may be attorneys or artists, oil and gas executives or real estate agents.  While their service is valued they are seldom professional city planners or traffic flow analysts. and they rely on the advice of City staff and City management.  Their decisions are referred to City Council for final review and approval.

Bellaire has debated the question of protecting residential zoning versus encouraging commercial ventures for 50 years or more. It was a primary cause of the recall election in the 1970s.

A permitted use is a use that is allowed as long as the landowner meets all of the other requirements of the particular zoning category. Permitted uses allow for the use that is intended by the designation and no action is required by Planning and Zoning or City Council.  Which means permitted uses should be closely scrutinized by the residents and City Council before being approved.

Specific uses, which because of their nature and existing location are not appropriate for categorizing into zoning districts, are allowed in various zoning districts by a Specific Use Permit (SUP). The procedure for approval of an SUP includes notice, and public hearings before the Planning and Zoning Commission and City Council.

Bellaire’s attempts at spot zoning have turned into a nightmare scenario.  This really began with the terrible changes made in 2013-2014, when P&Z and 5 members of Council approved a disastrous reversal of commercial areas with the UV-D and CMU.  The city had moved along quietly up to that point after the turmoil and recall election in the 1970s.

For decades the perimeter of the downtown commercial area adjoining residential areas, was zoned CCD-1 (the area in blue on the image below). which allowed 2 story height or 25′ on small parcels and 3 stories or 35′ for planned development structures on an acre or more. 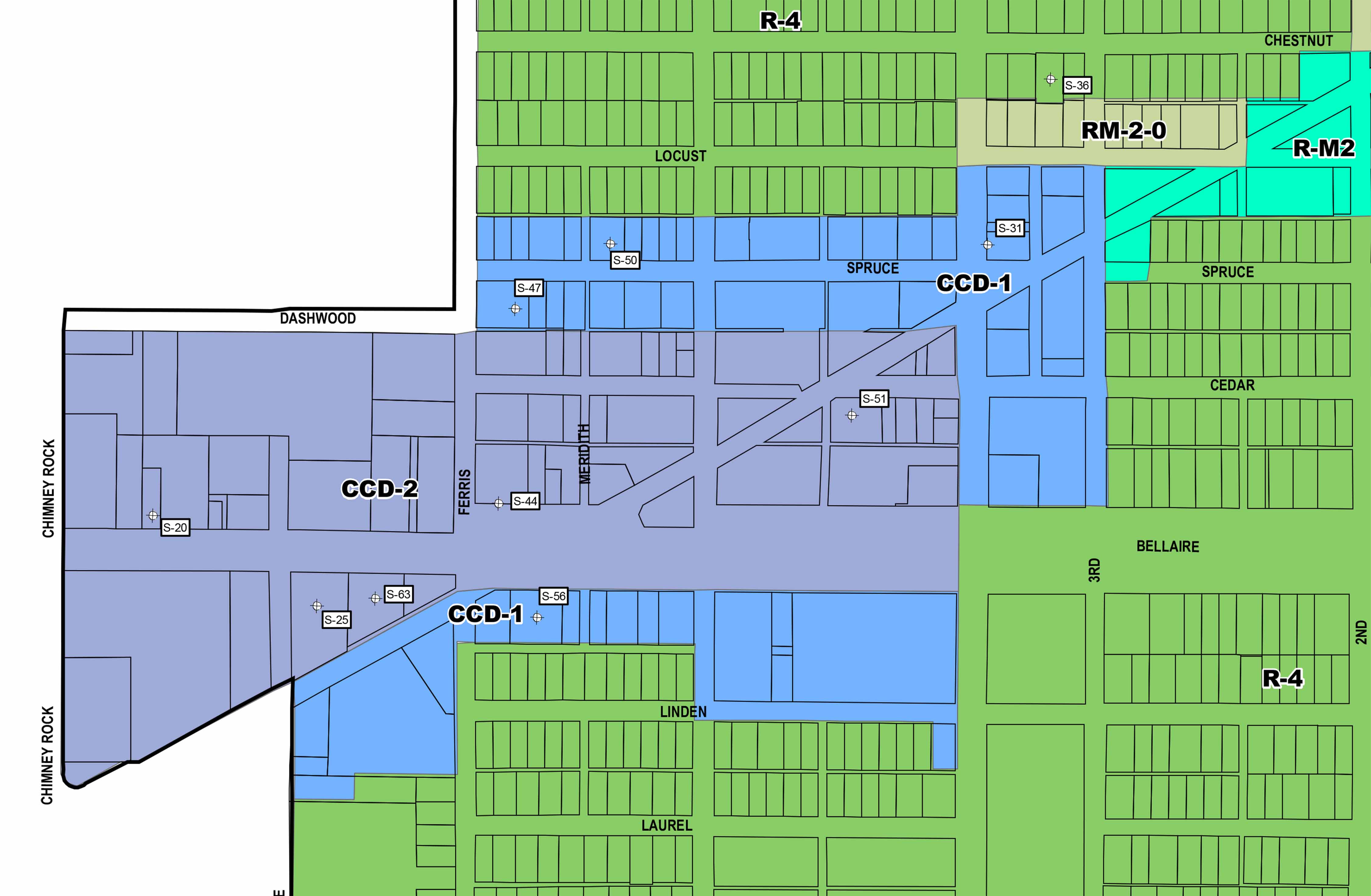 CCD-2 (the area in purple) allowed taller structures, up to 79 feet plus extras, in the central areas that did not connect to residential, such as  the Bellaire Triangle and Randall’s Center.  It made sense.  See map at right.

But zoning in commercial areas of Bellaire was changed in 2014.  Despite overwhelming opposition from residents and businesses, all members of the Planning and Zoning Commission (Winfred Frazier, Mark Steinberg, Bill Thorogood, Dirk Stiggins, Paul Simmons, Lynne Skinner, and E. Wayne Alderman) did away with CCD-1 and CCD-2.

Check out the very last revision!

The CCD-1 and CCD-2 zones were combined with RM-F, RM-1, 2 or 3. which were originally a mix of Residential-Commercial Mixed-Use areas along areas of Bissonnet and Bellaire Blvd.

The various zoning areas were rearranged into Urban Village-Downtown (UV-D) and Commercial Mixed Use (CMU) districts.  Links to the actual ordinances can be found at the end of this article.

Maximum commercial building height on a small lot in the UV-D (the bright green area around H-E-B on the zoning map below)  was increased from 2 stories to 40 ft plus a possible 20 ft more (60′).  Just 15 feet from residential properties.

Not only was the maximum height increased in the UV-D, P&Z and 5 members of City Council actually approved a minimum height of 30 feet!  And there is zero setback for new construction.  This was part of the City’s promotion to rezone these areas.  How about that “small town feel” while doing away with one story buildings? 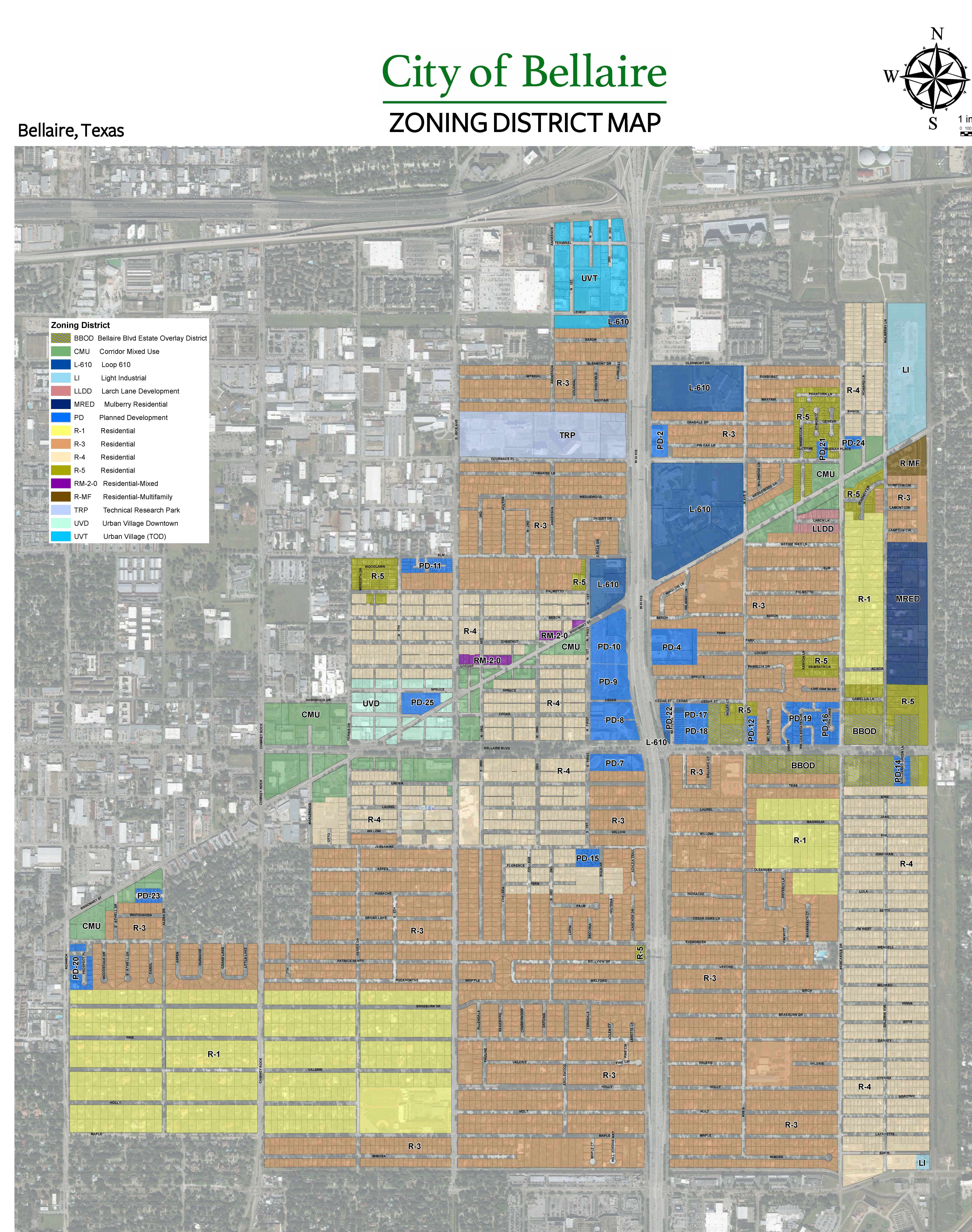 One example in the UV-D: all those one-story structures with their own parking lots are ‘grandfathered’.  Any new structure must be at least 30 feet tall and built at the edge of the property line.  No small shops and quaint boutiques, that’s for sure.

New structures must be built with zero feet of setback from the property line, 50% for residences, 75 percent for commercial structures.  The setback allowed is for front entrances, porches, landscaping.

No front areas for parking.  So we get a new, glamorous Spruce Street, with public parking and a narrow 25 foot wide street, behind a grocery store serviced by 18-wheelers.

With the front facades of the buildings constructed with zero setback, the only private parking would be below the buildings.  Think wall-to-wall H-E-B style buildings the UV-D.

In the Spruce/Fifth project, located in the UV-D, streets have been narrowed and over half of the the original street right-of-way is being used for public parking, sidewalks, and landscaping.  Apparently designed to accommodate construction of new buildings under the new ordinance.

Take a look at the new commercial building at the corner of 5222 Spruce at Ferris.  Per the engineer’s drawing, the wooden form for the sidewalk is running along the property line as required by the ordinance. 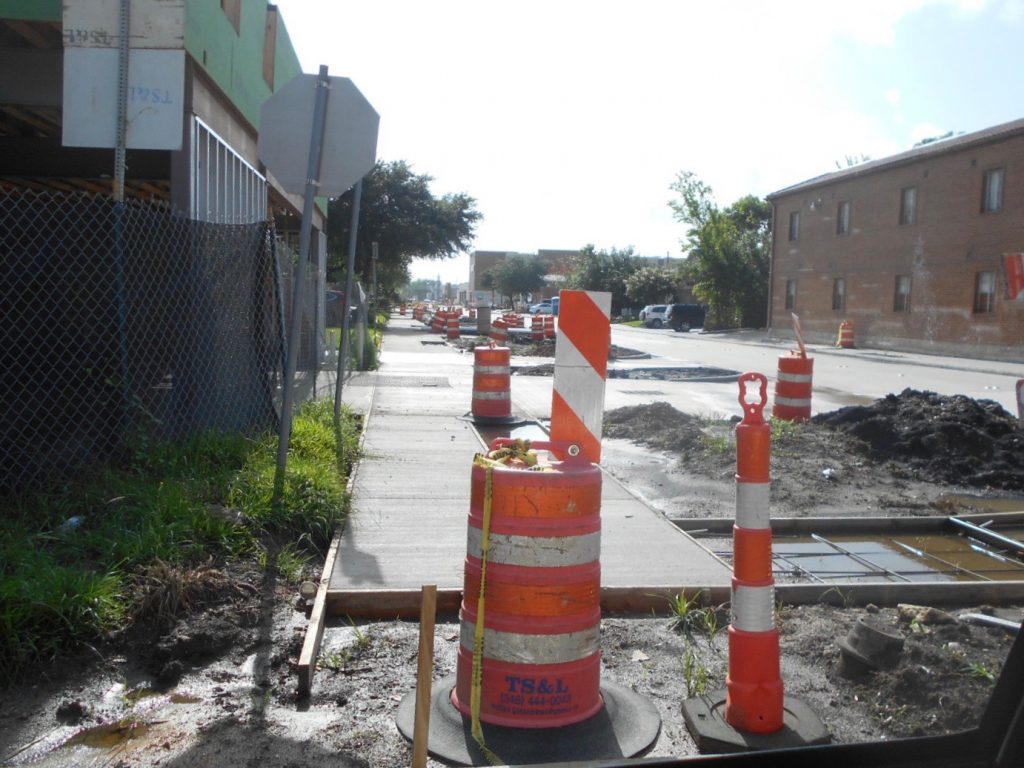 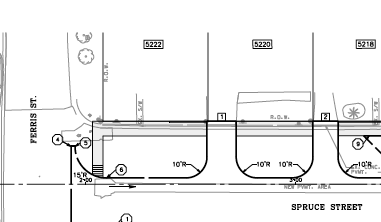 The requirement is zero setback at the property line, for either attached single family townhouses or commercial structures.  The property lines of residences and businesses run to the edge of the 60′ wide street.  To meet the requirements of the UV-D ordinance a new building would be situated where a property line meets the street, and it must be at least 30 feet tall.

The only way now to provide a space to walk in front of a new building would be to install a sidewalk and curb along the property line, into the right-of-way. That would allow parallel parking while still retaining a fairly wide commercial street.  Or just destroy the wide commercial street with the Spruce/Fifth project.

What a mess.  Did the members of P&Z and City Council understand what they were approving in 2014?

Were the Mayor and members of City Council aware of this restrictive zoning ordinance when they approved the Spruce/Fifth project in 2018?

What will it take to return the current UV-D district back to the more protective and less onerous CCD-1?

In the CMU, the darker green along Bellaire and Bissonnet on the zoning map,  the maximum commercial building height on a small lot (up to 1/2 acre) is 40 ft plus a possible 20 ft more (60′).  Quite an increase from the earlier 3-story height limit.

Areas of 1/2 acre or more now allow a maximum height of 53 ft.  plus 20 ft more (73′).  The same maximum height remains for Planned development, and the Multi-Family component is included.   Again, 15 feet from residential lots.  The good news is that there does not seem to be a minimum height requirement, and a 15 foot setback is allowed. 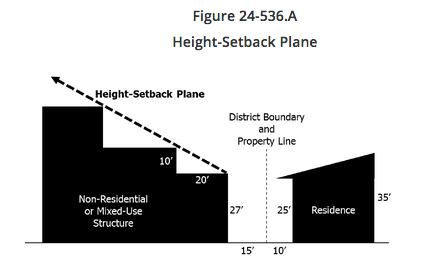 The only accommodation to adjoining residences in both zoning districts is a setback plane.  Perhaps rear balconies?

A Mixed-Use Multi-Family component (apartments and condos) was introduced for the new districts. Building heights were increased.

I can assure you that none of the 5 members of Council or any of the 7 members on P&Z who voted for these zoning changes in 2014 were affected by this change.  They won’t suffer the consequences of a 5-story apartment building or a 6-story condominium rising along the side or rear of their  home.


The Comprehensive Plan was used as the basis for these changes, even though it is just that, a plan, and more applicable to a new suburban development than a 100 year old ‘City of Homes’ that is built-out and has limited land available for development.

Meanwhile upscale communities in the Houston area – West University, Southside Place, the Memorial Villages – continue to protect their residential areas from this sort of intrusion by commercial or multi-family structures.

This is about more than “not in my backyard”.  This is about the future of Bellaire, residents’ quality of life, and the property values of our homes.  Missteps and the inability of recent City Councils to judge the consequences of their decisions have led to poor choices that will affect us all. 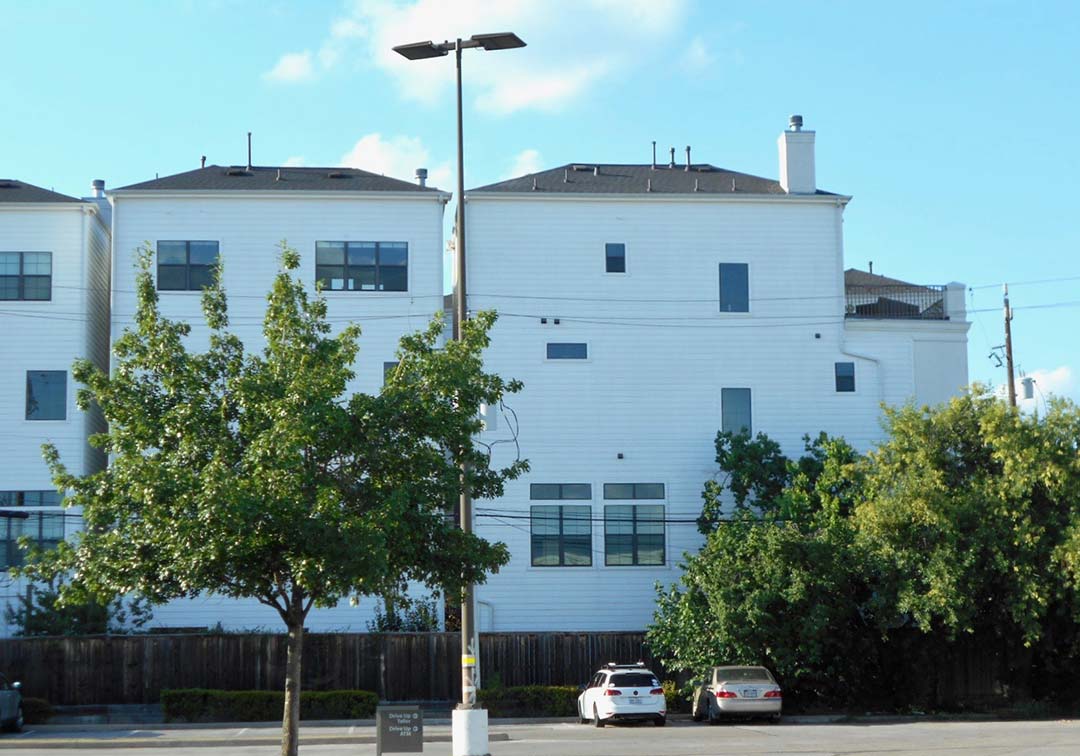 Would you want to live with this in your back yard?  5 or 6 stories? Would a setback really matter?  It could happen to residents on Locust.  Click to enlarge photo.

You can find all current City of Bellaire Zoning Regulations here

This plat shows the original 60′ wide street in the 5100-5200 blocks of Spruce.  The property lines clearly run to the edge of the street.

Sec. 24-615. – Standards Applicable to All Planned Development Amendments and Specific Use Permits.

A planned development amendment or a specific use permit may be granted and may be allowed to continue if it meets the following criteria and standards and is otherwise in accord with this Code. (Ord. No. 81-066, § 1, 11-2-1981)

(1) The proposed planned development amendment or specific use permit is consistent with the purposes, goals, objectives and standards of the comprehensive plan of the City of Bellaire;

(3) The proposed development will not have an adverse effect on the value of the adjacent property;

(5) The applicant for the development has adequate financial and technical capacity to complete the development as proposed and has met all requirements of this Code, including such conditions as have been imposed as a part of a planned development amendment or specific use permit.

Bellaire’s Debt is $116.4 million as of 6/30/2020 with another $6 million in bonds still to be issued.  Another bond issue is under discussion for 2022.  Find Bellaire on the Texas Comptroller’s list for 2018; more bonds have been sold since then: https://comptroller.texas.gov/transparency/local/debt/city.php?cityname=Bellaire&citysubmit=GO