Bellaire Property Taxes Up 25% Over The Next 5 Years?

UPDATE 9-27-2019:  Some good news.  On Wednesday, October 2, 2019, the City Council meeting will include a presentation regarding a proposal to increase the total tax levy for the 2019 tax year (fiscal year 2020) by 3.28% by proposing a tax rate of $0.4473 per $100 valuation.  Based on the earlier suggestions of an 8% increase this comes as a relief to taxpayers, though many residents felt no tax increase was needed due to the increase in revenues of a million dollars or more per years for the past 5 years, plus higher appraised values for many property owners are anticipated.

Could we see our Bellaire property taxes increase as much as 25% over the next 5 years?  A proposal for an 8% increase for 2019, and increases of 3.5% per year though 2024 was  discussed at at the first of several City Council meetings and workshops to discuss next year’s budget.

Bellaire’s City Manager had a go at shaming Bellaire residents for petitioning to vote on 4 or 5-foot wide concrete sidewalks in their front yards.  In a Proposed Budget FY2020 amounting to tens of millions of dollars, Mr. Hofmann made a point of pointing out the $80,000 cost for the Charter election scheduled for next May.

The reason for the petitions, the $4 million dollars Council diverted from street and drainage bond funds to build stand-alone sidewalks, wasn’t mentioned.

No one on Council at the July 15, 2019, meeting seemed concerned about a line item for $30,850 for consultants to study City fees. Really? We can’t figure out how to raise fees without a consultant? But let’s highlight the expense for that democratic process involving hundreds of Bellaire residents, to petition a change to the City Charter.

Perhaps that was just to deflect attention from the real problem about this year’s budget – the City’s prospects for a decline in future income versus outgo. Residents ask why, with all the new homes, increased values, and higher taxes? Where has the money gone?

Everyone with the City and Council seemed to agree that the state of our finances is no fault of City Council or the City Manager.

Is A Large Tax Increase In Our Future?

The Mayor claimed that it’s due to 50 years of kicking the can down the road. That’s got to be a pretty sad can by now.  Well, at least $3.7 million dollars from the cancelled stand-alone sidewalks remains available, and it’s going to come in handy. 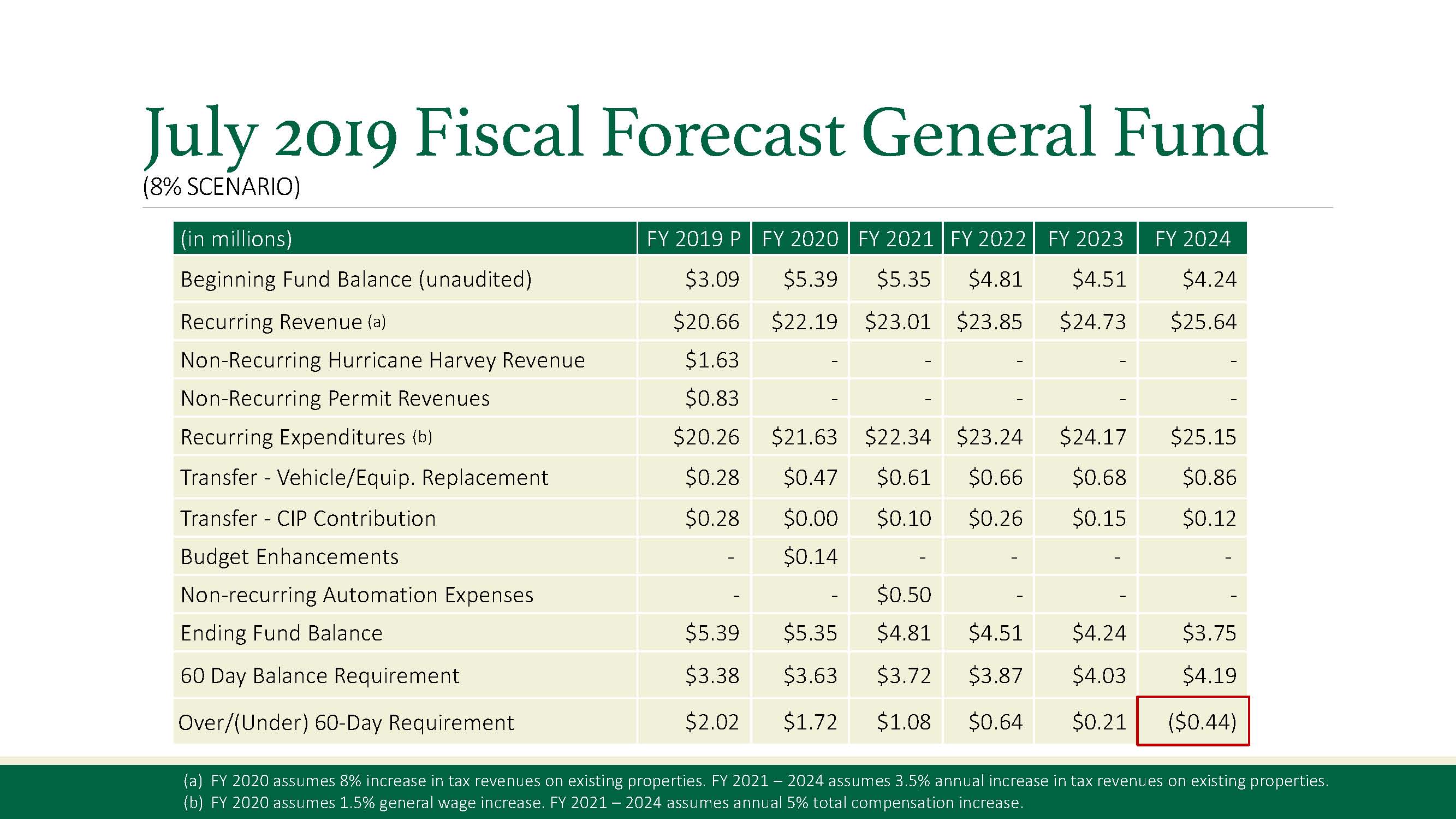 The City Manager placed the blame on Harvey and now the 3.5% cap on property taxes, so he proposed a property tax increase in 2020 to the full 8% still allowed. Then the maximum 3.5% increase per year on our taxes for the next 4 years. Plus an 8% increase in water/wastewater rates in 2020 and more increases to follow.

Apparently City fees will rise, too. Guess we’ll see what those $30K consultants recommend. The Mayor suggested that it’s up to the residents to decide if they prefer give up some City services or to pay more for them. Nothing specific for now.

Not mentioned – $9.6 million, most of it from the $20.5 million in anticipated property tax revenues, will be paid out in debt service in 2020. Total revenues will be higher.  After the last of the 2016 bonds are sold our bonded debt will be $126.6 million, per capita one of the highest in the state, but just a year ago the City Manager was promoting another bond election for 2019.

Now we’re told the City is running low on funds and we will see a 24% increase in property taxes over the next 5 years, not including any increase in appraised values. And the City Manager wants about a million dollars in this year’s budget to plan for the next bond proposal.

One member of Council questioned the need for a FY2020 budget item for $500,000 computer assisted dispatch system for the first responders. Good question. Why do we need this in a town of 18,000 people living within 3.3 square miles? We already have dispatchers and they’re not going away.  The City Manager did not respond.

What Do We Really Want To See In Bellaire
And Where Does The Money Go?

In recent years Council has approved numerous unnecessary expenses – $75,000 for a pathways study even though they knew pathways could not be funded.  $50,000 for a branding study that produced some sort of sad, leafy B, or maybe a P, as a symbol of the City.

And shame on us for opposing that new symbol, because now we have a dreadful City website (wonder what that cost), the loss of our longtime City of Homes logo, and the loss of a sense of common identity as Bellaire residents.  Guess the City Manager and City Council showed us, all right.

Over a quarter of a million dollars has been spent on the Holly Street Trail since 2014, with little improvement. The City has spent about $38,000 in the past few years on banners hanging from light poles along Bellaire Blvd.  Why?

Last year Council approved construction of a future maintenance and traffic nightmare, the streetscape being built on Spruce and Fifth.  The landscape budget alone was close to $400,000, no idea how much the new parking areas cost. Never mind what will happen to the small businesses.

Studies, consultants, lots of fancy graphics and presentations. What was the cost in time, labor, and materials for the fancy layouts of those blocks of stand-alone sidewalks?  Millions of dollars go out to ARKK, the City Engineer’s firm.  Maybe it’s time for an outside investigation of the spending practices of the City.  We don’t know how much waste is buried in the City accounts.

Money was no object.  Wasteful spending seemed to be the byword.  We’re told that somehow it will all help Bellaire. For now we’ll have to hope there are no more floods and the real estate market remains stable.

When did it begin to feel like us against them? I’m not sure, but it’s gotten worse in the last five years. City staff and members of City Council and Planning and Zoning throw their support to contractors and developers rather than homeowners and local businesses.

There’s a push for commercial redevelopment, including multi-family, directly adjacent to residences. Apartments and condos are now discussed in Bellaire for the first time in over 60 years. Residential neighborhoods were threatened by proposals for concrete pathways and commercial structures.  See 4301 Bellaire Blvd and 4800 Fournace.

It’s difficult to detect or define, but there seems to be a disconnect by City government, a sort of carelessness about the welfare of residents and businesses, too much bond money running through the coffers, so many contentious issues that it’s hard to keep up. People are becoming disheartened.

For many residents their home is their major investment, but recent decisions by Council and P&Z seem to discount the value of those homes, to find them less important than commercial development. Will we remain a city of homes or turn into a suburban sprawl?

Remember how you’re paying for those earlier extravagances and your property tax increases when you’re in the voting booth in November and casting your ballot for mayor and three council seats.

Email the Mayor and members of City Council via our City Clerk, Tracy Dutton, tdutton@bellairetx.gov, and request that she forward your email.