City of Bellaire – Beautification or Boondoggle?

What’s the value of a City of Bellaire construction contract?  Apparently if you’re the owner of the company awarded contracts for the City Manager’s pet projects it’s not worth the paper it’s written on.

The Spruce and Fifth Street project has been underway for over 9 months, the proposed project end date is February 15, 2020, but not even the Fifth Street portion is complete.  The City’s contract called for completion in 300 calendar days, including allowance for rain days.

Two other A Status Construction contracts, Bolivar/Maple and the waterline replacement project that includes Innsbruck, have already passed the completion date, apparently with no penalty.

According to the City contract if the contractor, A Status Construction, LLC, fails to complete a project on time it will be charged $500 a day for liquidated damages until the contract is completed.  But the company has already submitted requests for 157 delay days for the Spruce and Fifth project.  Over half of the term of the 300-day contract and well beyond the February 15th end date!  For now the City says the requests are under review.  Meanwhile the inconvenience and hazardous conditions on the site will continue.

Find the list of delay days here.  The ‘Bobby’ mentioned in the justifications is the ARKK representative responsible for construction management.  Thirty (30) of the claimed delay days are due to some sort of controversy over the wall on Fifth – see the photo below. Meanwhile A Status Construction has received payment for over half of the $2.5 million dollar construction contract.  Find the City’s update here.

The motion was voted down 4 to 3.  In favor were new Council members Lewis, Hotze, and Wesely.  Opposed were Mayor Friedberg and Council members Verma, Pappas, and Fife – all of whom originally voted to approve this project.

How Did We Reach This Point? 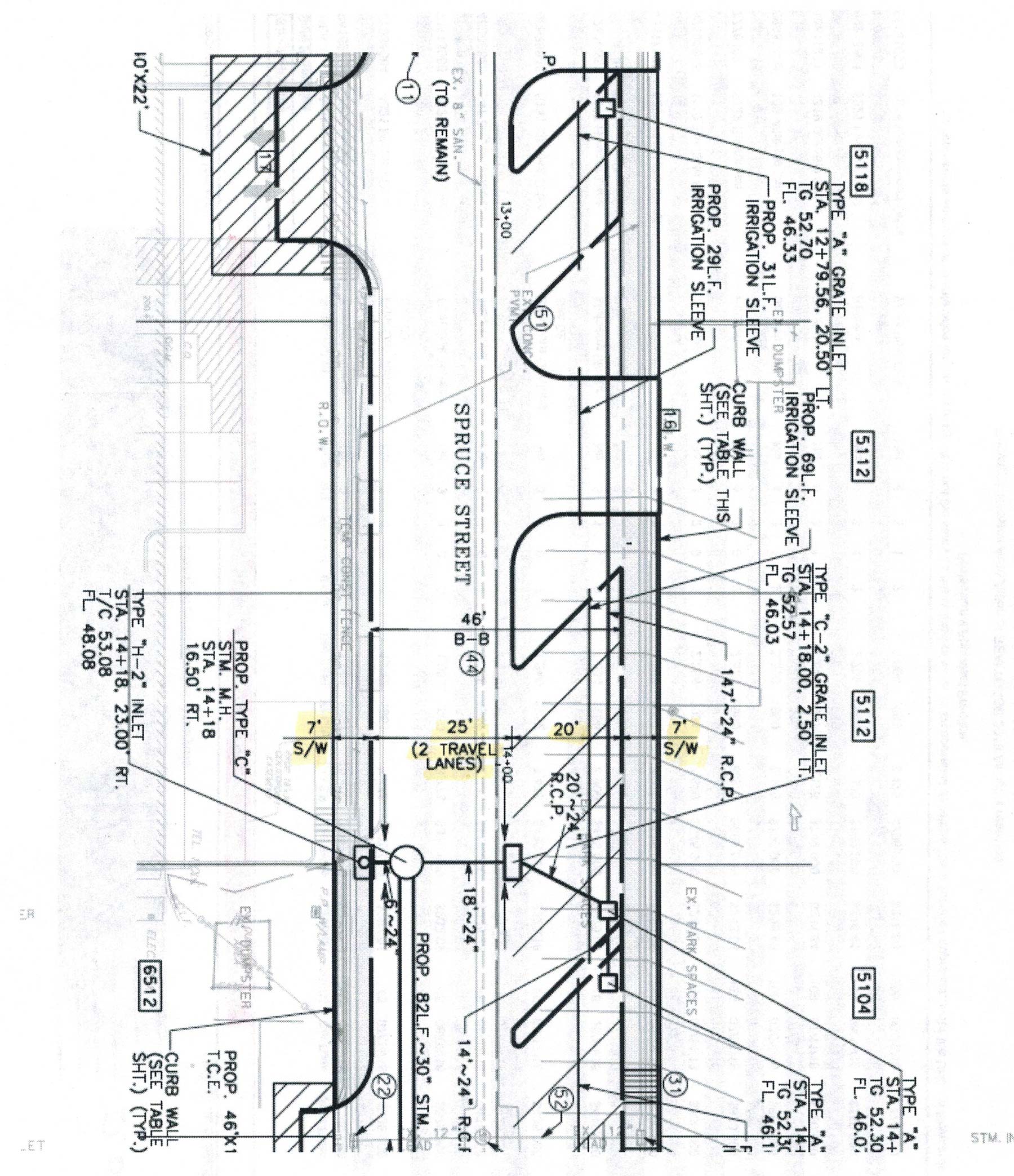 From inception most of the Spruce and Fifth businesses and property owners opposed the beautification aspects of this design, which included using City rights-of-way to narrow the streets to 25 feet or less, then add 7-foot wide sidewalks and angled public parking in front of businesses.

Businesses have relied on the use of that right-of-way for decades for their deliveries, access to their parking lots, and extra parking spaces.  The City Manager and City Council overruled their concerns.  One company, Hempel, has already moved out of the City because they could no longer accommodate large delivery trucks.

Watch the Council meetings of March 19, 2018 (start at 24 minutes for comments) and January 28, 2019 (start at 14 minutes).   Bellaire residents also spoke against the design, cost, and the harm to our local businesses.

This was the presentation on February 18, 2018, at the Council meeting when the project was approved despite objections by businesses and residents.

If City Council just had to spend millions of dollars to beautify downtown Bellaire, why not start along Bissonnet or Bellaire Blvd?  And when and where was this project discussed prior to the 2016 bond election?


As problems with this site became apparent I initially faulted only the construction contractor for the slow progress, erratic schedule, and disorganized, cluttered job site, lack of signage, and the hazardous conditions for pedestrians and for drivers.

Then I recalled that there are people being paid to oversee just these sorts of problems, responsible for construction management of the project.  In this case it’s ARKK Engineering, the City’s engineer who also recommended A Status Construction.  ARKK Engineering received $446,000 in construction management contracts for the Spruce/Fifth and Bolivar/Maple projects.  Costello Engineering received a $500,000 contract for the design and administration of the same projects.

2018 view of Fifth at Bissonnet 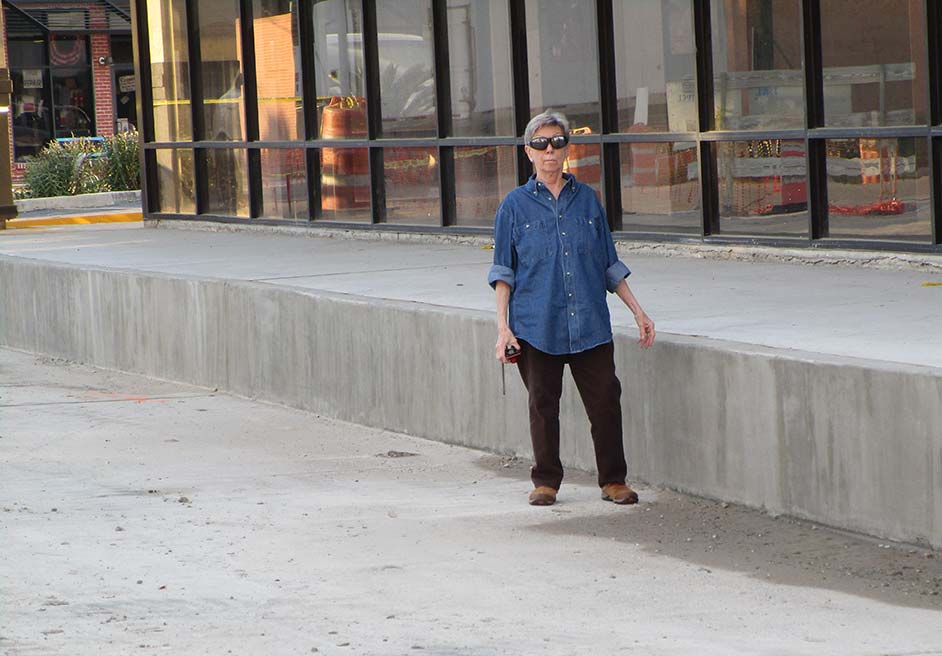 The ‘Wall’ on Fifth St. and no more dedicated right turn lane onto Bissonnet.

As for the Costello Engineering design and administration, let’s start with the sidewalk on the west side of Fifth Street from Cedar to Bissonnet (photos above).  Due to the lowered street it is now a retaining wall a couple of feet high.  That’s high enough for a pedestrian (a small child, perhaps) to fall off, possibly in front of a moving vehicle, so a handrail will be required.

Drivers had better beware of getting too close and scraping the passenger side of their vehicles.  And that dedicated right turn lane onto Bissonnet is gone!

The public sidewalk is in front of the pylons!  Why?

Some sort of ramp has been built in front of the Sugar Shop, ending at a brick wall.  The ARKK engineer’s explanation is to “satisfy ADA requirements”.  For who?  This is private property.  Click on the photo at right.  With multiple levels it’s dangerous to traverse on foot, much less in a wheelchair.  And how does that help someone in a wheelchair access the public sidewalk?  All the parking spaces in front of the shop are gone.


One question: with this ramp on private property, who is responsible if someone falls and suffers an injury , the property owner or the City that installed it?

Farther along the sidewalk on Fifth you’ll find another example of the engineering – an extension of the curb at Cedar where the sidewalk drops off to cross the street. Open the photo at left.


At least one driver exiting the Brisket Bar-B-Q to Fifth on a dark and rainy night drove off the edge of an excavation left when the driveway from Fifth was demolished.  Where were the warning signs and barricades?

Even though the history of flooding in that area is minimal, the new areas of pavement in the 5200 block of Spruce are much lower than the original street so they can hold water. Will this lead to high water for vehicles during heavy rains?

And although the plans call for 25′ wide streets, for some reason the new pavement in the 5200 block of Spruce is 22′ wide. See photo at left.  The remaining width is shown on the plans as angled parking and sidewalk in most areas.   We’ll see how the drainage works in the next heavy rains.

Personally I’d like to see Fifth Street completed, the 5200 block of Spruce rebuilt to the full 60 feet of width, and the 5100 block of Spruce left alone for now.  Forget about the public parking and landscaping.  But that’s unlikely to happen unless some sort of litigation occurs.

Follow this link for some background on this project

Regardless, there are plenty of people who share the responsibility for this mess. Whoever or whatever, something has gone terribly wrong.  Isn’t it time to step back and call in experts not associated with any Bellaire projects to assess what has occurred to date and determine the best course of future action?

Which leads to my earlier question: What good is a City of Bellaire contract if a company fails to perform on time and is allowed to extend the contract and continue the work – with no penalty ?  Is it time for some outside investigations into this project?

Past members of City Council approved about a million dollars in the 2020 budget for Mr. Hofmann to use to plan future projects.  What do you think?

Bellaire home owners are also at the mercy of the City when it comes to rights-of-way.  The front yard of just about every home in Bellaire includes the City right-of-way up to their property line, which may be 10 to 15 feet or more from the paved street.  That’s why the City Manager and some members of City Council could have added $4 million of stand-alone sidewalks in front yards without permission.  Residents pushed back, and now we’ll have an election in May of 2020.

Vetting by the City  for this company was negligible to non-existent.  Now it has been revealed that the surety bonds for this company were fraudulent.  While the company may not be at fault, they were required to purchase valid bonds.

Currently two of those projects have run past the contract completion dates but are still in work, one includes the long-running project along the 5700 block of Innsbruck and another the $1.8 million dollar fiasco on Bolivar.  Nothing has been mentioned about charges for liquidated damages that are part of the contracts.  The third, for Spruce and Fifth, is due for completion by February 15, 2020.   The projects and costs are listed below.

Here’s a quick overview of how over $8 million dollars of our 2016 Bonds for Better Bellaire were committed for the three projects.  The only competitive bids were for the construction portion, since per state law no competitive bids are required for engineers, ARKK and Costello.  The City Manager recommends them and Council approves them.  A Status Construction was the low bidder for the Spruce and Fifth construction, I haven’t verified the other two.

This project includes the 5700 block of Innsbruck, which has also been under construction for many months.  Innsbruck was finally declared completed around the end of January, 2020.

Group C Phase 2 (a) Maple/Bolivar and (b) Spruce/Fifth – Streets, Drainage, Sidewalks.  This project may include bond monies from Water and Wastewater bonds as well.  Both projects remain unfinished as of 1/25/2020.

(a) Maple and Bolivar project
A Status Construction – Construction Contractor – $1,763,703
Completion within 240 days – April 29 – December 24, 2019
No notice of anticipated completion date and no notice of liquidated damages.

Following are some highlights from the City of Bellaire contracts with A Status Construction:

For all the contracts noted above Delayed Completion calls for the OWNER to deduct from the money due to the CONTRACTOR an amount equal to $500 for each calendar day of delay as liquidated damages and extra expense for supervision.  No one with the City has mentioned if or when those damages will be collected from A Status Construction.

All claims for extension shall be made in writing to the OWNER no more than ten days after the occurrence of the delay or after the cause for the delay has become apparent.

On a calendar day basis, no extensions of time shall be allowed for adverse weather conditions that can be reasonably anticipated from historical weather data other than unusual inclement weather.   Rain days may be claimed if they exceed the number of days per month as listed in the contract.  A total of 97 rain days are listed for the year.

Included in City contracts is City ordinance 89-044, now revised as 9.5 under the Chapter 9 Buildings ordinance, stating “It shall be unlawful for any building materials of any type, trash, refuse or refuse containers to be stacked, stored or dumped on any public sidewalk or any part of a public street or upon public property”.  This has been the situation along Fifth at Locust for many months, but the City says this is allowed.  Click on the photo at left.

Bellaire’s Debt is $127.5 million at the end of FY2019, one of the highest per capita in the state.  Another bond issue is under discussion for 2021.  Find Bellaire on the Texas Comptroller’s list for 2018; more bonds have been sold since then: https://comptroller.texas.gov/transparency/local/debt/city.php?cityname=Bellaire&citysubmit=GO