Did Bellaire Voters Miss The Fine Print in the 2016 Bond Election?

I realize that you would prefer that we simply support you in your approval of this budget. That we hand you and the City Manager control of over $46 million in City funds with little or no examination of the expenditures. Some of you seem to resent any scrutiny about how that money is to be managed and spent.

Each time citizens speak out at City Council meetings I take heart, in hopes that members of Council will realize the level of resident discontent. That they will choose to follow the wishes of the residents instead of City staff. Unfortunately what I usually hear is defense and deflection.

A recent diversion by some members of City Council is to take Bellaire residents to task for complaining about the City’s spending. They love to remind residents that they, the voters, approved $54 million in bond issues in 2016. Which implies that the voters knew what they were voting for.

Maybe some did, but I’ll wager, based on the actual ballot language in the voting booth, (click on link at left) most thought they were voting for infrastructure repairs to our streets, new water and sewer lines, and improved drainage.

The ballot language for Proposition 1, for instance, was simply For or Against “The issuance of $24,000,000 in bonds for streets, drainage, and sidewalk improvements.” Twelve words.

Simple interpretation of this ballot language would lead one to assume the usual new street and drainage construction with a 4-foot sidewalk down one at least one side of the street. How were voters to know that $4 million dollars was included just for stand-alone sidewalks that were originally planned as Proposition 4?  One Council member wanted it rolled into Prop 1 for streets and drainage to make it less obvious. Three other council members agreed and voters were presented streets, drainage – and sidewalk improvements.

What about the $3 million dollar streetscape by H-E-B on Spruce and Fifth? That’s also financed by those 12 words from Proposition 1. As with the stand-alone sidewalks, it was not on the ballot and was not even discussed in 2016 during the bond election discussions.

But just 6 months after the election the City Manager finalized a half-million dollar contract with Costello Engineering to include the streetscape design. And not a simple street, drainage, and sidewalk improvement, either, which the businesses and property owners were ready to accept. Instead it was a deliberate and expensive plan to narrow streets, restrict traffic flow, and disrupt the commerce of the businesses on those blocks. And regardless of the objections of businesses, property owners, and numerous residents, all but Council member McLaughlan approved it.

Then we have Proposition 3, For or Against “The issuance of

How many voters who voted for this proposition were aware that over half those funds were to pay for a no-bid $12.8 contract with Siemens for the replacement of all the water meters in Bellaire, at a cost of $4.6 million dollars? Plus another $8 million dollars to renovate a wastewater plant that was operational and in compliance with the Texas Commission on Environmental Quality?  Why wasn’t that $12.8 million dollars at least posted as a separate proposition?

I equate the Siemens project in terms of “my central air unit needs repair, but the HVAC technician tells me the entire system must be replaced, including the furnace and all the ductwork in the attic”.  And a $500 repair ends up costing five, ten or twenty thousand dollars.  A few meters lost some accuracy?  Replace 7600+ meters!  Old equipment in the wastewater plant needs repair or maybe replacement?  Replace the whole works!

So shame on us, Bellaire voters, for our inability to read minds. For failing to properly interpret and clarify the language on those ballots while we were standing in the voting booth. The reality is that the lack of transparency on that 2016 ballot was appalling. It lead to some incredibly unpopular and divisive projects, and is indicative of how some members of Council and City staff operate. Now I have to wonder just what may be hiding in this budget.  Thank you.

The chart below is an overview from Siemens for future costs of the $12.8 million dollar contract.  We may no longer pay for meter readers, however there will now be numerous ongoing payments to other vendors for services.  It also shows Siemens’ estimate of positive cash flow by 2026, thanks to increased rates for water usage and this explanation from the Siemens presentation:

“The cost of the project will be paid for on an annual basis with respect to the debt payments and the operational charges incurred. The operating budget, which will assume the efficiency and energy savings, will have to be adjusted to meet the ongoing costs and the debt service payment will have to be assumed in the fiscal forecast going forward. (Specifically, the chart in the presentation breaks out all of the individual costs and shows the relationship between the debt and operating costs.)” 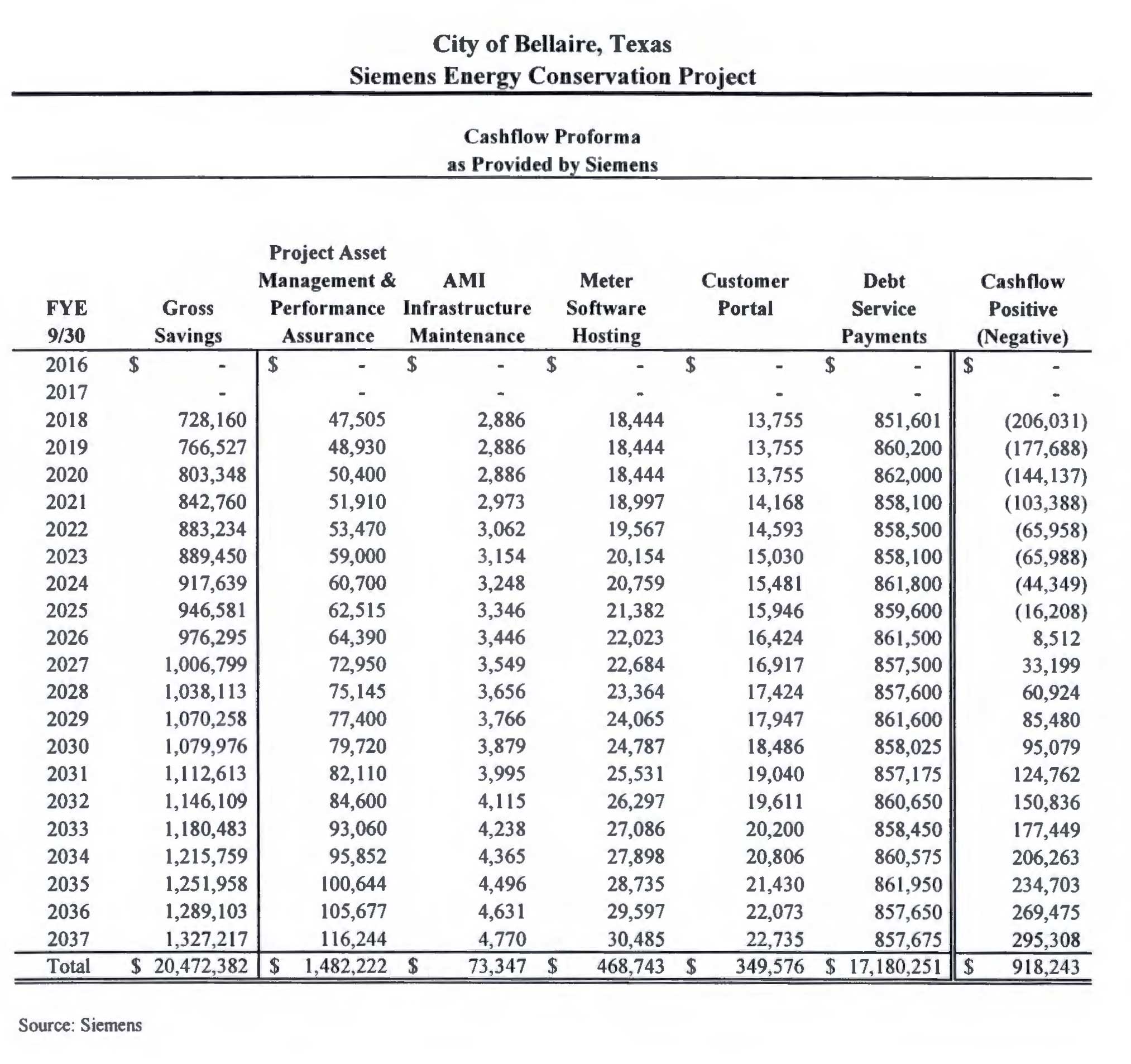 Find additional details on recent bond issues and City debt in this article: All that Debt – Where Has All The Money Gone?


Bellaire’s Debt is $123.8 million at the end of FY2019
Not including the interest.  The estimate FY2020 is over $126 million.  The issuance of these bonds will increase the current debt service requirements.

Per the FY2020 Budget, based on the City’s projected September 30, 2019 outstanding debt the highest annual debt service requirement would be approximately $9.6 million in FY 2025.

Based on the timing of the proposed issuances of bonds during FY 2020, the highest annual debt service requirement would increase.

Email the Mayor and members of City City via our City Clerk, Tracy Dutton tdutton@bellairetx.gov and request that she forward your email.