Bellaire’s Future & the Status of the 2016 Bond Funds

Click the graphic at left to review the 8 page draft of the end product from the recent City Council Workshop. It is a 5-year priority plan distributed by the City Manager, and a lot for citizens to digest.  For most intents and purposes, for now the future of Bellaire was basically decided in these 2 days.

There will be an election for mayor and 3 City council seats in November, 2019.  With the number of distressed business owners/residents,  other residents upset about sidewalks, pathways, spending and taxes, we may have a lively election in the Fall.  The $47 million bond issue proposed for the November 2019 election may now be on the ballot in 2020.

A Quick Rundown on the 2016 Bonds for Better Bellaire 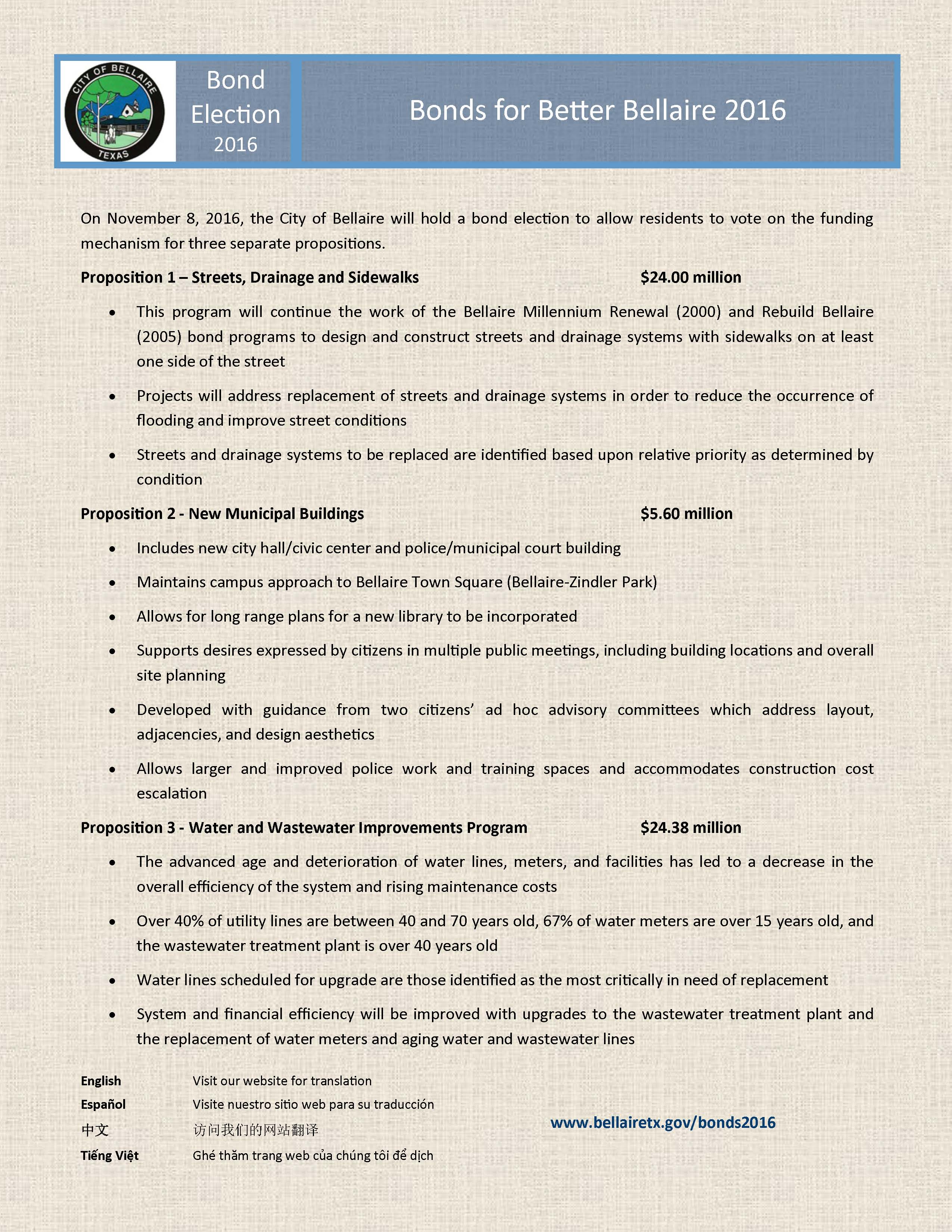 The estimated costs for the various Public Works projects to be included in the $54.98 million 2016 Bonds for Better Bellaire election were much higher than the actual bids received.

City Council had planned to set aside $4 million dollars for stand-alone sidewalks.  Due to strong objections from residents those sidewalks have been “shelved” and the $4 million can now be used for streets and drainage.  And a $3 million dollar flap gate project in Group C Phase 2 is under review and and may not proceed.

The decrease in cost for four projects now under way runs from a few hundred thousand for one to over two million dollars for another.  Here’s an overview of the City Manager’s original 2017 project selection: Bonds for Better Bellaire 2016 Project Selection

As of mid-May two of the six projects plus the flap gates have not yet been put out for contractor bids, and there appears to be plenty of bond money on hand, or authorized to be sold, left from the 2016 election, as of mid-May around $20 million dollars.

If the City Council plans another bond election on 2020 we have to hope the estimated costs are closer to the final bids.

The priority plan for the next 5 years includes proposals for

Also a new City logo; new Public Works and Library buildings; and more.  Sidewalks and pathways are still part of the discussion.

Potential projects for 2020 include

Find the full Workshop agenda here.  Residents must decide if this is the right course for our City.

You can contact the Mayor and members of City Council via our City Clerk, Tracy Dutton, at tdutton@bellairetx.gov  Send comments, ask questions – they are your elected representatives.