UPDATE 12/31/2019: Notice of public hearings on January 9, 2020, for applications from HISD for revisions to the proposed sports fields at the old Gordon Elementary site on Bissonnet and from Cushman & Wakefield, on behalf of Southwestern Bell Telephone Company (AT&T), regarding the property at 6500 West Loop South.  Find more information in the Agenda for 1/9/2020 P&Z Session.

The HISD sports fields will be used by Bellaire High School for baseball and softball fields.  Major resident concerns include parking and traffic issues, including buses. All the drawings and plans can be found in the Agenda for 1/9/2020 . 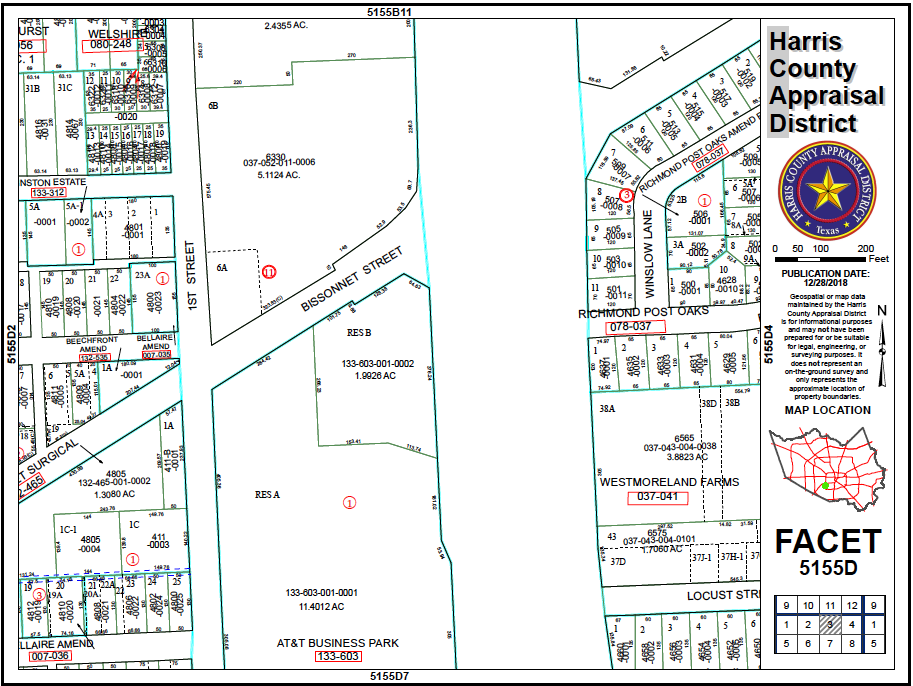 The Cushman & Wakefield request  for the large AT&T parcel at 6500 West Loop may not include a small parcel  that was sold to a developer, Atilla Tuna of Bissonnet Street Ventures, LLC, by SBC/AT&T.  The Cushman & Wakefield applications are for an amendment to PD-9 and PD-10 to allow the existing single-tenant building to be used for multi-tenant office, and to remove from PD-10 the approximately 1.9927 acres.

The 1.9927 acre parcel is the southwest corner of Bissonnet & 610 by AT&T – with the beautiful oak trees that line the roadway.  The new development has been marketed online for sometime.  https://www.loopnet.com/Listing/6400-West-Loop-South-Houston-TX/16588582/

A presentation for that development was made at the December 12, 2019, P&Z meeting by Identity Architects, who are representing Atilla Tuna of Enclave Properties.

Old time Bellaire residents recall that part of the 1975 agreement with Prudential Insurance, the original owner of the AT&T building, included a promise to provide a parkland area at the corner of Bissonnet and Loop 610.  However the document or documents, if any, and the site development plans regarding any agreement, seem to have been misfiled or lost.  View the original Prudential Insurance ordinance here.

If the current applications are approved further zoning district amendments would then be required to (1) allow development within the Loop 610 zoning district on less than 4 acres, (2) allow a building taller than 6 stories to be constructed, and (3) allow retail businesses.

The commissioners did not address any requests for changes to the PD9 and 10 or Loop 610 District at this meeting.  One question was about the possibility of the private park that may have been included in the original development by Prudential.  Was that a requirement of the approval of the original Planned Development?  There was also some discussion of lot coverage, pavement, flooding and flood mitigation, impact on future 610 District applications.  Previous P&Z Agenda from 12/12/2019   More to come in January, 2020.

At the November 14, 2019, Planning and Zoning Workshop a representative from Identity Architects described some preliminary plans for a proposed planned development at 6400 West Loop@Bissonnet next to the AT&T building, part of a PD-10 in the Loop 610 District.

He described an office building with a height of 160 feet (approximately 14 to 16 stories) on about 2 acres that would include a mix of retail, restaurants, offices and parking.  Here’s the crux of this proposal.  The Planned Development use in the Loop 610 District calls for a maximum height of 6 stories, on a minimum lot size of 4 acres.  And no retail.