UPDATE 9/4/2020: A Public Hearing was held on Thursday, August 13, 2020, before the Planning and Zoning Commission, for the parking lot at 4300 Bellaire Blvd. I counted twenty speakers opposed the zoning request, no one spoke in favor. The next P&Z meeting is scheduled for September 10, 2020.  However the September 10th Agenda, just posted, contains no mention of the the parking lot other than in the minutes from the August meeting.  Oversight?  If not, what’s going on?

Representing Evelyn’s Park were Lou Waters, a member of the Evelyn’s Park Conservancy Board, and John Morton of Triple Crown Investments, the developer of Southside Commons, located in Southside Place.

Please, listen to the telephonic August meeting here , listen to your neighbors’ concerns and objections regarding this parking lot, during the public comments period at the beginning of the meeting.  There’s too much to report but I found the entire meeting fascinating.

At the end of the hearing the Chair, Ross Gordon, pointed out numerous errors and omissions regarding the application:

He might have added that the City of Bellaire neglected to mention that the City contacted Centerpoint about public parking in 2013 and 2016.  Read the letters here.

The request was filed by the Evelyn’s Park Conservancy in an attempt to circumvent the City’s order to remove the lot from the existing R-5 residential district after the parking lot was built in March of 2020 for the use of Southside Commons, located in Southside Place.

The Conservancy can share the use of the lot at certain times and now wants to amend the zoning and zoning map. Here’s what is being requested from P&Z


Simple, right?  Build a parking lot in violation of City codes and requirements, with an illegally issued permit. 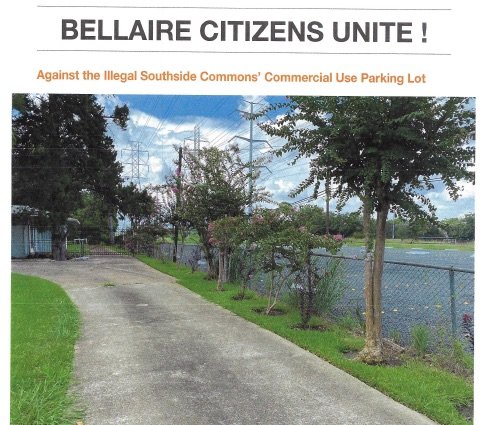 Area residents are fighting back. Apparently the members of the board of Evelyn’s Park Conservancy saw no problem with a public parking lot, open day and night, shuttles and vehicles coming and going until after 2 AM, full of strangers, in a residential area and just a feet away from a residence.  After all, it’s for the Park.

And what a delightful first view of our City as you enter from the east on Bellaire Blvd.  Why worry about Bellaire’s image and reputation for zoning, there’s nothing like a parking lot to lift one’s spirits!  And best of all for the board members of EPC, it’s not adjacent to one of their homes.

Seems like a perfect plan to circumvent a zoning ordinance, following the maxim ‘apologize later’.  But, if a parking lot can be built in R-5, why not in R-1?  How can the City approve an illegal permit for one request but refuse others?  I can see some serious court cases stemming from such a precedent.

Residents have expressed concerns about the actions of Development Services regarding developers for several years.  The City staff seems to spend a great deal of time and effort working with developers to prepare zoning applications instead of advising developers to educate themselves to the process and our Code of Ordinances.

The request will now be considered by the Planning and Zoning Commission on Thursday, September 10, 2020.   Comments may be submitted to the P&Z Commissioners via email to zoning@bellairetx.gov until September 2, 2020.  Emails are important if citizens want this illegal parking lot removed.

Email comments to zoning@bellairetx.gov by September 2nd.  Please, let P&Z know what you think of this request!!

Find the original article No Logo, No Welcome Sign – Just A Parking Lot At The Main Entrance To Bellaire? here.