How Are Things Going In The UV-D District? 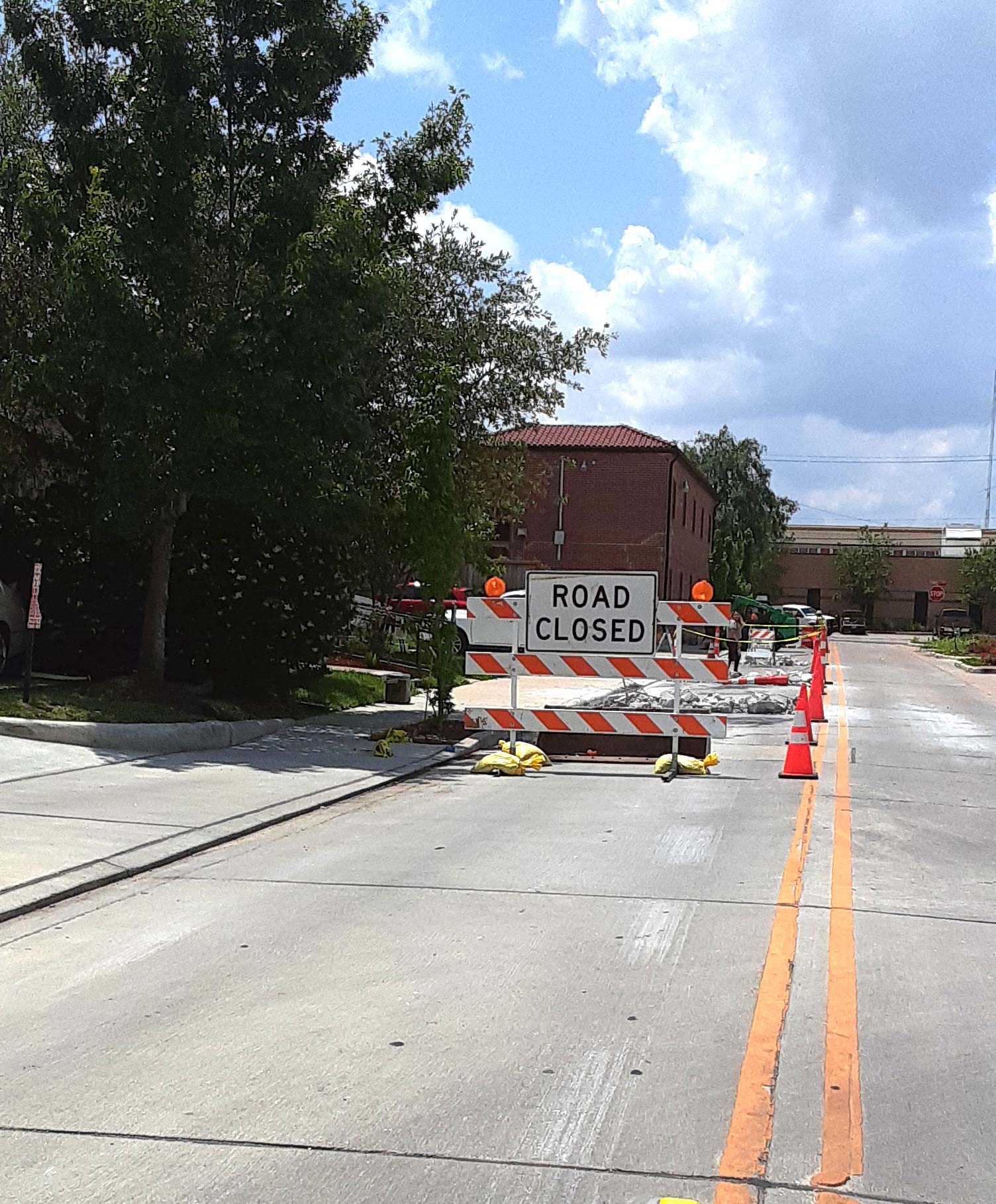 UPDATE: Portions of recently completed 5100-5200 Spruce are once again being demolished and reconstructed due to improper installation of electrical conduit and irrigation lines.  Ponding and poor drainage are also problems.  The good news is that the cost is on the contractor, not the City. The question is, what do these patched areas mean for the future stability of the pavement?

This was part of a $5.2 million dollar contract to A Status Construction.  The streetscape design was opposed by residents and businesses but approved in 2017 by the Mayor and City Council.  The then city manager promoted this design as a pedestrian friendly area.  What do you think?  The article below from August, 2021, was initially inspired by my queries to the City concerning the “ornate” street lights along the 5100-5200 blocks of Spruce St and Fifth St along H-E-B. “What lights?”, you may ask. The ones purchased in 2018 but never installed.

A streetlight in the middle of sidewalk?

Over $80,000 of bond money was committed to those lights back in 2019 when City Council approved a $2.5 million contract with A Status Construction to construct the streetscape along those blocks.

The cost for installation was $38,850, and  the wiring and foundations, such as they are, are in place.

Meanwhile, in October of 2018, (actually prior to Council approval) thirteen (13) lights were specified in an agreement between Paul Hofmann, the former city manager, and CenterPoint Energy, and then ordered in March of 2019 at the non-refundable cost of $43,148. Find that Agreement here. Total cost for the lights plus installation is $81,998.00.

But there are problems with that wiring and those foundations.  Due to the problems, as well as the ongoing litigation with the contractor, the lights remain in CenterPoint’s possession.

That set me to ruminating on the evolution of that streetscape and those lights. Why did P&Z completely rewrite the zoning ordinances for this downtown area in 2013-2014?  Why did 5 out of 7 Council members approve the new ordinance in 2014, in opposition to the majority of businesses and residents who spoke to this ordinance?

The ordinance is complex and difficult to comprehend, to unravel.  Did those Council members understand what they were approving?  Did this rezoning for UV-D have anything to do with the new H-E-B store, announced in 2015?  That building straddles what were the old CCD-1 and CCD-2 zoning districts.

The new ordinance, the Urban Village-Downtown (UV-D), was described as a pedestrian-friendly small-town district, and though most speakers opposed the plan a few residents touted the idea of new boutiques and cafes.

But under the new ordinance all new buildings other than single family-attached must be constructed with a zero front setback of 75%. That is, 75% of the building must be constructed at the front property line, bordering the existing sidewalk.  The remaining 25% cannot be used for parking.  Single family attached homes require 50% of the structure at the front building line and garages entered from the rear of the building, which would require alley access.  The buildings must be at least 30 feet tall, contain two stories, and can cover up to 90% of the lot.  Public parking is a mixed-bag, but for most new developments drive-under parking or an area parking garage is likely.


That pretty much stymies those small boutiques and cafes.  Here are a few of the restrictions in the ordinance passed in 2014:

→ Single-family of at least five attached units (townhouses) with 50% of the building at the property line; drive-under parking “and any above surface portion of partial subsurface parking”  Whatever that means.  Also, no townhouse garages can face the street.
→ Planned developments could be allowed.
→ Mixed-use multi-family developments could be allowed.
→ Businesses on the north side of 5100-5200 Spruce back up to residences.
→  Find the entire Ordinance here

Was the City administration already aware in 2013 of H-E-B’s plans to build a 2-1/2 story grocery store at 5106 Bissonnet?  A building with minimal to zero setback to allow more square footage, that would replace the original strip center?

Did the old zoning for this area, CCD-1 and CCD-2, prevent this new design? The old zoning ordinances can be found below. Half of the new H-E-B would have been in CCD-1, the other half in CCD-2.  So perhaps a new ordinance was required?   And voilà, we got the UV-D?

Then in February, 2019, came City Council’s approval of the multi-million dollar streetscape that would supposedly bring outdoor cafes and boutiques to the area.  But remember, by 2014 most new buildings would require zero setback for 75% of the  frontage, minimum two stories and height of 30 feet, drive-under parking.

On a 50′ wide lot, that would leave 12.5 feet of width for an outdoor patio.  What we have is a fun house of sorts, with streets zigzagging, weed-infested parking areas, no fancy lights, and a lawsuit filed against the City by the contractor for that project.


No one on Council addressed these requirements in 2019.  Who knows, maybe they were never aware of them.  Regardless, the existing one-story businesses were ‘grandfathered’ and advised that they no longer met the requirements of the new zoning district.

Was It Worth It?

What have we gained from this $2.5 million street and drainage project?  Hopefully some improved drainage, which could have been added at much less cost.  What else?

What have we lost?  We lost the open feel of an inviting and welcoming business area.

When O’Reilly Auto Parts submitted plans to the Board of Adjustment in April of 2021 for a new one-story building to replace their existing structure on Spruce their application was turned down.

We lost our wide, spacious, well-maintained streets that provided easy access to businesses.  Most cities take pride in their wide streets and boulevards, but Spruce was narrowed from 60′ to 25′.  In the photo above, the property lines run along the sidewalks.  New buildings would front at that line, with no front parking lot, only the available public parking spaces.

Now we have narrow streets with hit-or-miss public parking spaces, separated by concrete islands filled with plants, weeds, and debris.  The parking area above encompasses half of the original 60′ wide street. If a vehicle must parallel park in the street, the street is reduced to one narrow lane.  What happens to those public parking spaces if they block access when more drive-under buildings are constructed?

Will we see more of this type of building along Spruce, shoulder to shoulder, crowding up to the sidewalks?  Maybe even taller?  Is this what residents want in a ‘small-town pedestrian-friendly’ area with cafes and boutiques?  Is there any possibility of making some changes to this ordinance?


One more thought — the site of the old Randall’s grocery store.  Will it be a target for a new development in the UV-D?  The same rules apply, including the zero setback at the front property line!  Stay tuned.


Find more articles on this Zoning District below: