For over 70 years the 30 acre Texaco/Chevron campus along Fournace, between South Rice and what is now Loop 610, was a mix of offices and labs running primarily on a 9 to 5 schedule five days a week. It had its own zoning district, the Technical Research Park District (TRPD), and operated quietly as a good neighbor. Now there are changes proposed, including a new zoning district called the North Bellaire Special Development District (NBSDD) 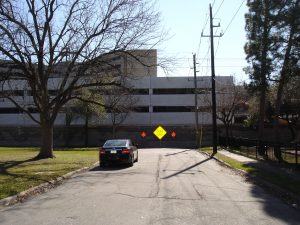 View from Mayfair St. Garage is about 40 feet from the rear property line.

The current owner, SLS Properties, was not content to work with the TRPD zoning, though they did receive permission to construct a large multi-story parking garage (at right). Of interest, under the TRPD the rear setback for that garage is based on a ratio of .84-foot of building height per one foot of distance.

But the new NBSDD draft calls for just a 15′ setback from adjoining residential properties. Can that be true? The ‘height setback‘ starts at 27’ of height, but the building setback doesn’t change.  Lot coverage, which is bad enough at 75%, is increased to 80%. An increase, when we have no idea how the changes on Loop 610 may affect flooding in that area.

In addition there’s no mention in the NBSDD regarding the Special Warranty Deed that transfers with the property, detailing environmental conditions such as groundwater and soil contamination, calling for vapor barriers, prohibiting residential structures at ground level, hospitals, schools, nursing homes, day care centers, and similar uses.  Those restrictions must be enforced by residents, not the City.  The City can issue a permit that includes everything that is excluded by the Special Warranty Deed.

The NBSDD came about when the City chose to work with SLS Properties to specify the possibilities for zoning on the property. Kendig Keast was hired to meet with the Director of Development Services to work on a draft that would adhere to the Comprehensive Plan.

The final product is now in the hands of Planning and Zoning. I don’t know who, if anyone, from P&Z was included in these meetings. But as far as I can determine no residents living in the area to the north of Fournace that are most affected by this redevelopment were consulted or involved in any of these meetings, or in the preparation of the NBSDD draft.

Reading the proposed draft, the NBSDD is a veritable smorgasbord of goodies for SLS Properties or any other developer.  Pull out the stops for height and site coverage. The options are wide open, it’s a real “you want it, you got it!” document.

Texaco may have been there on the prairie first in the 1940s with their lab, but the areas around this property were developed from the 1950s onward as deed restricted residential subdivisions. Had Texaco not located there we would probably see the back yards of homes along the north side of Fournace, similar to the south side of Fournace for homes that face Tamarisk.

In fact, before the environmental problems on the property were revealed one of the favored possibilities from the Comprehensive Plan was the construction of new residences. And as I see it, the property remains residential in nature.

In fact, before the environmental problems on the property were revealed one of the favored possibilities from the Comprehensive Plan was the construction of new residences. And as I see it, the property remains residential in nature.

Therefore shouldn’t any rezoning continue to accommodate the Comprehensive Plan? From the Plan for this area: “Long-established neighborhoods of single family detached homes are immediately north of the area and also to the south across Fournace Place.” and “A range of potential uses might be appropriately accommodated, but only with such uses being located and designed to provide protection to adjacent residential areas.”

SLS Properties stands to earn a reasonable rental revenue from the two existing office buildings.  They already have their garage. They can still develop the remaining property.  The land to the east of the existing tall buildings, along Loop 610, might be replatted as a separate parcel for more aggressive development.

Regardless, it is time for the City of Bellaire to stand up to protect the adjacent residential areas, especially the more than 150 property owners in the area north of this proposed zoning district and those bordering Fournace Place to the south.  The best way to accomplish this is to enact a zoning ordinance that any Bellaire resident might consider acceptable in their own neighborhood.

P&Z can propose that if a new zoning district is deemed necessary, 60% coverage of the remaining developable land be allowed, which is more than that allotted to residences in the area.  The building heights can be limited to a maximum of 2 stories or 35 feet.  Our area is full of busy one and two story retail centers.  P&Z can relegate taller structures to border Loop 610.  Perhaps the language for uses in the CMU could help, but no mixed-use. If possible, limit business activity to no later than 9 PM.

Please consider further recommendations from the Comprehensive Plan:“pocket parks, landscaped plazas and seating areas, and generous plantings within street rights-of-way… green amenities and area enhancement” and “the entire Special Development Area should have a core objective of extending the signature urban tree canopy of Bellaire into the interior of the area”. This could be a beautiful area.

The City paid Kendig Keast good money in 2017 to revise the Comprehensive Plan, but what’s the use if P&Z or City Council chooses not to follow their recommendations.

In what has to be one of the most curious explanations of zoning,  Chairman Gordon explained that this proposal, which pretty much opens the door to anything, was designed to prevent over-development of this property.  That anyone wishing to develop a portion of the land would have to come to P&Z for approval.  A sort of ‘throw it against the wall and see what sticks’ method of zoning.

He stated that environmental, drainage, and traffic issues were not part of zoning, and are addressed by other City departments, or ordinances, or boards or commissions, or something. Precisely who, what, or how was not clear or defined.  Gary Mitchell, the Kendig Keast representative, said some of these things could be addressed under item C, the Site plan.

And the inference was that if everything a developer could want was in the ordinance, which if passed by City Council would become law, no one would ever consider approving all or even most of those possibilities.

That if the ordinance was approved in 2021, years later P&Z commissioners and City Council members would know or recall that many of the permitted and special uses in that document were not really intended for approval.  Sure, they might be unaware that the land had been under the eye of the Texas Commission on Environmental Quality, but that’s not important for zoning purposes.

Danny Sheena, the property owner, called in to the meeting to comment.  He felt the draft was well written but highly restrictive.  That each building would have to be approved.  That’s true, and according to this draft a building might be approved with a height of 85 feet, built just 15 feet from the residential property line.

Rather than presenting something that proposes to allow anything and everything, why not produce a well written document that actually states what is allowed, period?

It’s up to the Bellaire residents to decide if this is how we want our Zoning Laws to be enacted.

Listen to the telephonic video of meeting

Written comments can be sent to zoning@bellairetx.gov.  The deadline for comments is Wednesday, February 3, 2021, 5 PM.